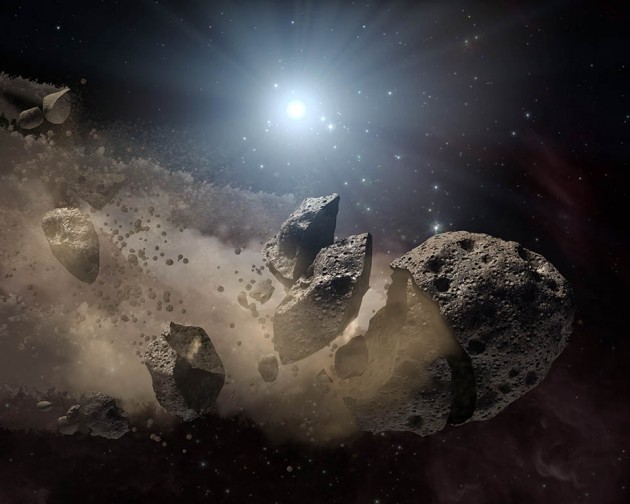 This artist’s concept shows a white dwarf star surrounded by the bits and pieces of a disintegrating asteroid. Astronomers have found a white dwarf that shredded and gulped down an object the size of Ceres. (NASA/JPL-Caltech/T. Pyle )

In the movie “Star Wars,” the Death Star uses a futuristic weapon to blast apart the planet Alderaan. It seems the stuff of science fiction, but astronomers have found a real-life “Death Star” that shredded a rocky planet and is swallowing the dusty remains.

The star in question is known as a white dwarf. When a sun-like star reaches the end of its life, it swells to form a red giant. Its outer layers then puff off, leaving behind a hot core of carbon and oxygen. This white dwarf is very dense, cramming half a sun’s worth of material into a sphere the size of Earth. A teaspoon of white dwarf would weigh more than a ton.

An international team of astronomers examined thousands of white dwarfs to look for ones with unusual chemical compositions. They followed up their strangest target with the MMT Observatory in Arizona. This target is located about 440 light-years away in the direction of the constellation Gemini. (A light-year is 6 trillion miles.)

This white dwarf showed strong signs of chemical elements like silicon, magnesium, calcium, and iron – all of which are abundant in rocky planets like Earth. Since a white dwarf’s gravity is so strong (100 thousand times Earth’s gravity), these heavy elements should have sunk out of sight below the surface. Since we can see them, they must have been deposited there relatively recently (in an astronomical sense).

The most likely source is a rocky planet that wandered too close to the white dwarf and got torn apart by tidal forces. The debris settled into a disk around the white dwarf and is raining down onto the star’s surface. Observations from the Gemini Observatory in Hawaii detected this debris disk, confirming the astronomers’ theory. 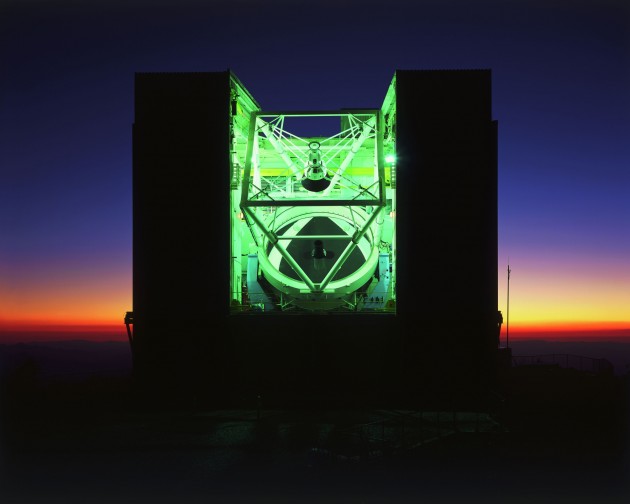 Judging from the amount of material on the white dwarf and surrounding it, the hapless planet was about the size of Ceres, the largest asteroid in our solar system.

The team also noted that the amount of hydrogen the white dwarf has swallowed is much less than expected. (In our solar system, Ceres contains a significant amount of ice, which would split into hydrogen and oxygen if consumed by a white dwarf.) This suggests that any water or ice the dwarf planet possessed was boiled off long ago by the red giant’s heat.

“There are now more than 450 extrasolar planets known, all of them bigger than Earth, and we don’t really know much about their compositions. Here we’re seeing the remnants of an extrasolar dwarf planet, which gives us a chance to learn about the chemistry of worlds in distant planetary systems,” said Mukremin Kilic of the Smithsonian Astrophysical Observatory.

“White dwarf science is telling us that there are many small planets similar to those in our solar system out there. Since it is not possible to detect such small objects in orbit around other stars with our current technology, studies such as this one offer a unique opportunity to learn about other planetary systems,” added lead author Patrick Dufour of the University of Montreal.