The Republic of Panama’s proposal to implement four Traffic Separation Schemes for commercial vessels entering and exiting the Panama Canal and ports was approved unanimously by the International Maritime Organization in London, May 23. Based on studies by Smithsonian marine ecologist Hector Guzman, the new shipping lanes are positioned to minimize overlap between shipping routes and humpback whale migration routes and reduce vessel speed four months a year at the peak of the whale overwintering season.

Several cetacean species move through the tropical waters near the Pacific entrance to the Panama Canal in the Gulf of Panama. With Smithsonian ecologist Richard Condit, intern Betzi Perez-Ortega and colleagues from Whalesound Ltda. in Chile and the College of the Atlantic in Maine, Guzman recently published results from six seasons in Panama’s Las Perlas Archipelago. Based on photo identifications of nearly 300 individual humpback whales, including 58 calves, they estimated the total population at more than 1,000 animals that visit year-round and matched them to individuals sighted from the Antarctic Peninsula, Chile and Colombia. They concluded that the Archipelago, only 60 kilometers (40 miles) from the Pacific entrance to the Canal, is an important breeding area for humpback whales from the Southern Hemisphere. 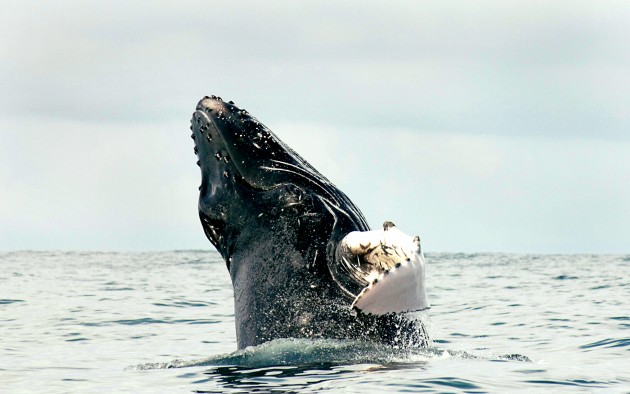 Panama is a leader in global commerce and a steward of this exceptional marine biodiversity. Nearly 17,000 commercial vessels cross the Gulf of Panama each year. This number is expected to increase significantly when new locks now under construction permit larger, “post Panamax” vessels to transit the Canal and enter its ports.

In the Pacific, an array of three schemes is also expected to significantly diminish the potential of ship collisions with coastal fishing vessels and pollution-causing accidents affecting seven marine protected areas, including Wildlife Sanctuaries, a UNESCO World Heritage site and wetlands protected under the international Ramsar Convention. 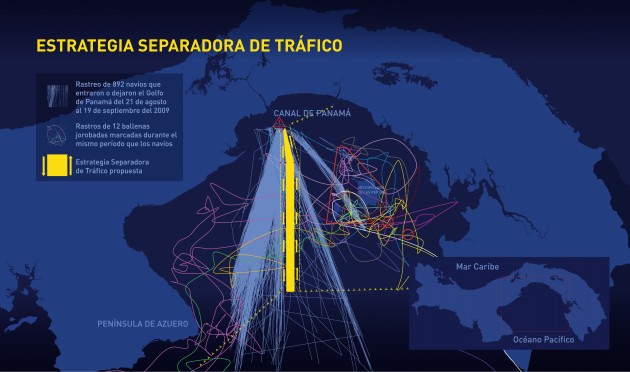 Traffic Separation Scheme: The blue lines show ships that entered or left the Gulf of Panama between Aug. 21 and Sept. 19, 2009. Colored lines show the tracks of 12 tagged whales during the same period. In the new scheme, boats would all enter via the yellow area. Click to enlarge. (Image courtesy Smithsonian Tropical research Institute)

The Panama Maritime Authority took the lead, based on the input from the Panama Canal Authority’s Captain Fernando Jaen and the Maritime Chamber’s Jocelyne Anchor to define the policy and shepherd it through the approval process.

“This is a clear example of Smithsonian research that makes a difference,” said William Wcislo, acting director of the Smithsonian Tropical Research Institute. “We are a research organization, not a conservation organization, but our research feeds conservationists’ efforts to protect biologically rich and vulnerable ecosystems.”

“Scientific results impact conservation, but putting policy into effect takes a great deal of time,” said Guzman. “We have to be patient and consistent. It took two years of teamwork to design the policies and obtain a consensus for the traffic separation schemes for whale protection. Now Panama has six months to implement the TSSs, and the maritime industry has six months to comply.”

Guzman is currently working with scientists and policy makers from Ecuador and Chile to safeguard passage for whales along the entire coast of South America and plans to expand the project to other countries in South and Central America.