Chip a tooth and expose a nerve and the result can be a searing sensitivity to hot and cold. The hard outer layer of a human tooth protects the sensitive nerves inside.

The narwhal tusk is the structural inverse of a human tooth, rigid in the center and surrounded by a flexible outer layer containing porous tubules. Scientists have long realized the signals a narwhal receives from the nerves in its spiral tusk—which is actually a wildly elongated tooth—provide critical information about its icy ocean environment.

Now, in experiments using a “tusk jacket” on living narwhals, a team of scientists has confirmed for the first time that sensory information is indeed transmitted to the brain from the tusk. In addition, the team has also for the first time mapped the complex sensory pathway between the narwhal’s tusk and its brain. 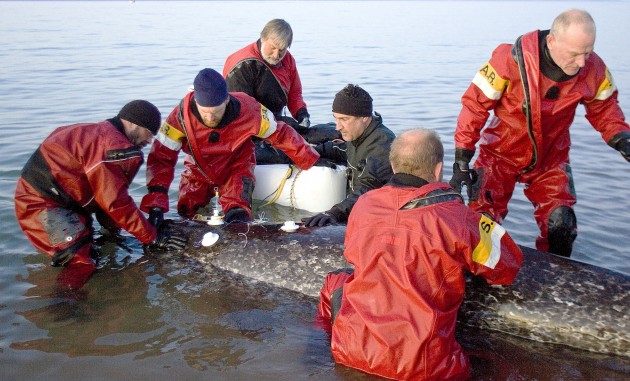 With electrodes attached to the back of a narwhal wearing a tusk jacket, a research team monitors the animal’s heart rate at Kakiak Point, Arctic Bay, Baffin Island, Canada. Martin Nweeia is at center in black. (Photo by Gretchen Freund)

The research team is led by Martin Nweeia, a practicing dentist and a clinical instructor at the Harvard School of Dental Medicine, and member of the Vertebrate Zoology Department of the Smithsonian’s National Museum of Natural History. A paper published today (Tuesday, March 18) in the journal The Anatomical Record traces the path from sensation to brain in the narwhal using anatomy, histology, genetics and neurophysiology.

During studies of narwhal tusks, Nweeia’s team found nerves, tissues and genes in the tusk pulp known for sensory function and also known to help connect the tusk to the brain. To confirm that sensory information does indeed travel to the brain from the tusk, the team slipped a clear tube sealed with foam at either end onto the tusks of narwhals that were temporarily captured in the chilly waters off Baffin Island in the Canadian Arctic.

They then sloshed water, either high or low in salt content, through the tube and over the tusk in separate tests. The response was a change in the narwhal’s heart rate, measured by a Holter monitor, the same portable device that people wear to document heart rhythms. All animals were released unharmed after less than 30 minutes. 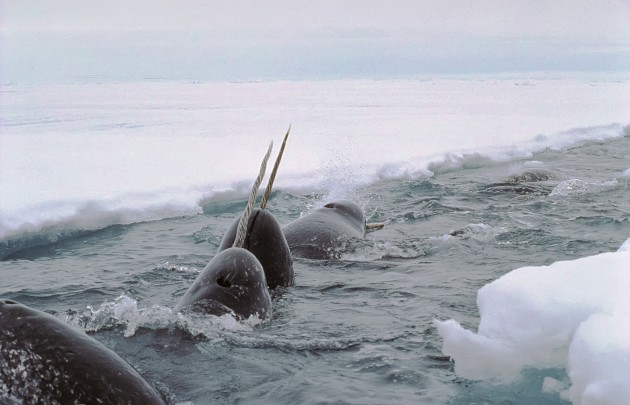 The scientists found significant changes in the animals’ heart rates depending on the salinity of the water that came into contact with their tusks.

Why would varying water salinity matter? An animal that lives in an ever-changing ocean environment with ice formation is critical to the success of the species, the researchers surmise. Nweeia has concluded that the narwhal tusk senses variations in the salinity of the ocean waters as a possible way to demonstrate fitness to females. Such ability may help males find females in estrus, or help locate foods essential for newly born narwhals.

Water salinity was the sensory stimulus that triggered signals to the brain and then sparked responsive changes in heart rate, Nweeia explains. “This is the first tooth that has been shown by in vivo testing to have sensory function to a normal variable in its environment,” he says.

The next steps for Nweeia’s group are to complete a 12-year study collecting traditional Inuit knowledge of the narwhal and to find an evolutionary link to the tusk’s microstructure. “Imagine: exploration, wonder and mystery are all wound up in this magnificent spiraled tusk and sensory organ,” Nweeia says.

Note: For more information about narwhals and their tusks please see the Narwhal Tusk Research website.