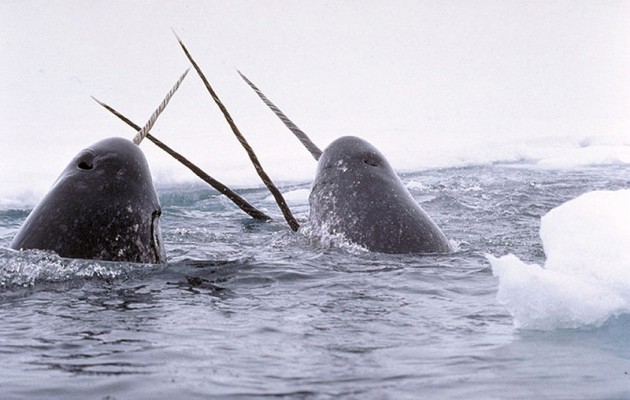 Narwhals breaching for air in an open space in the Arctic sea ice. (Photo by Glenn Williams)

Swimming in the frigid waters of the Arctic and surfacing in narrow gaps in the sea ice to breathe, the narwhal is one of the world’s most elusive and bizarre marine mammals. Considered by some as the jousting knight of the sea, this whale sports a single tusk sticking six to nine feet straight out from the top of its skull.

In recognition of World Whale Day on Saturday, Feb. 17 this year, Insider is taking a closer look at the narwhal’s tusk.

The narwhal’s long, spiraled tusk is unique–no other animal has anything quite like it.

“People don’t realize that the tusk is really a giant tooth,” explains Michael McGowen, curator of marine mammals at the Smithsonian’s National Museum of Natural History in Washington, D.C.

“The tusk grows out the front of the narwhal’s head, protruding horizontally through the animal’s upper lip. They have no other erupted teeth except for this single tusk.” 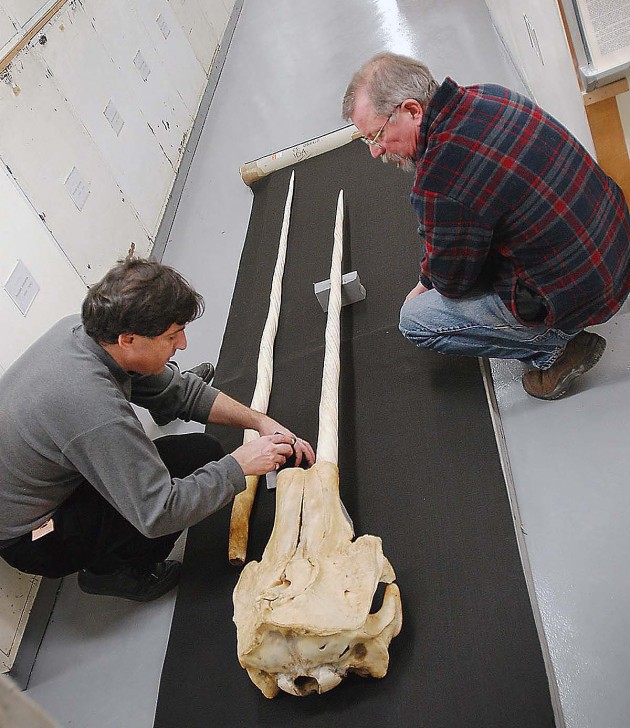 In rare cases, a set of two narwhal teeth erupt as tusks. When both tusks erupt, they remain asymmetrical–one is always longer. Such asymmetry is found nowhere else in nature.

The Museum of Natural History has two rare specimens of narwhal skulls with double tusks that are on display in the current exhibit “Narwhal: Revealing an Arctic Legend.”

Unicorn of the Sea

Why should a whale swing such a big sword? Scientists aren’t exactly sure, but this appendage has captured the human imagination for thousands of years.

Even before Herman Melville wrote Moby Dick, whales were the stuff of legend. Beyond the marine myths that most whales are associated with, the narwhal most likely inspired the depiction of a mythical land-based creature. 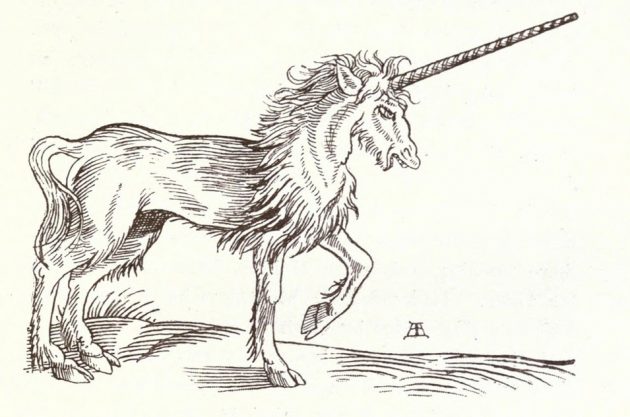 An early drawing of a unicorn from the 1890 book “Curious Creatures in Zoology,” by John Ashton

The first reports of a horse-like creature with a spiraled horn came from Roman writer and naturalist Claudius Aelianus (170-235 CE). Trade in “unicorn horn” to Europeans may have started as early as 300 years later with Iron Age Scandinavians (500 BCE – 500 CE) and medieval Greenland Norse (1200-1400 CE) exporting narwhal tusks to Western Europe.

“The narwhal’s tusk looks like the classic unicorn horn with its spiral,” says Ashley Hintz, marine mammals docent at the Natural History Museum.

“Narwhal tusks were highly sought after in Europe during the Middle Ages when people thought they were the horns of unicorns. Narwhal tusk was ground up and taken as medicine to cure disease and protect from poisoning.”

A wound that never heals 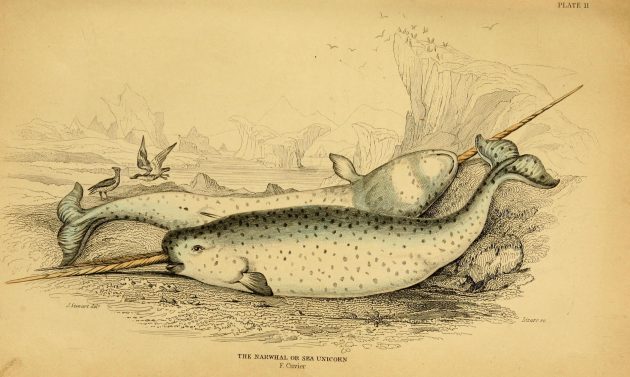 Illustration of two beached narwhals from the 1843 book “The Naturalist’s Library,” edited by Sir William Jardine.

The narwhal’s most dazzling feature can also be a liability, particularly in the densely packed sea ice of the Arctic. Navigating a nine-foot tusk in the narrow cracks of exposed ocean between ice sheets can lead to collisions with rock-solid ice.

The counter-clockwise spiral pattern of the tusk though provides flexible strength, think of a steel cable versus a steel rod, enabling it to bend up to 12 degrees in any direction.

Constant agitation of the tusk, however, means the wound at the base of the tusk never fully heals. This area has become a home for whale lice.

“Whale lice are found on lots of different species of whales, and they tend to congregate in this wound on narwhals,” McGowen explains.

Whale lice “are crustaceans” and they feed on algae and skin cells on the narwhal’s body.”

How do narwhals use their tusks?

Scientists have several theories for the purpose of the giant tooth but no one is sure how or why it evolved.

Usually, only males grow a single tusk, suggesting that it may have a function in sexual selection. Females judging the suitably of mate by the size of his tusk, horn or body mass is a common trait among animals. 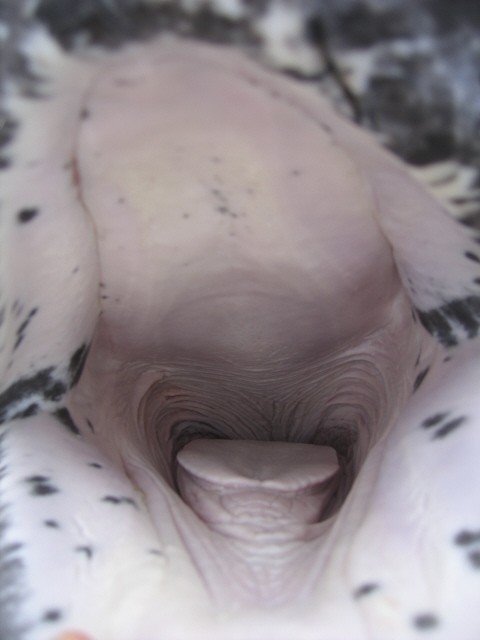 Inside the narwhal’s mouth, there are no teeth. (Image courtesy Martin Nweeia)

Recent research demonstrating a statistical link between the length of a male narwhal’s tusk and the size of its testes would seem to support this theory, except there is one hiccup: female narwhals can grow tusks too.

About 15 percent of female narwhals develop an extended tusk. Scientists are perplexed by this unusual occurrence which also throws cold water on the theory that the tusks are used only during male combat.

The tusks may be used by males like the lances of jousting knights to demonstrate their dominance, scientists say. Forehead scars seen on male narwhals and broken tusks may be evidence of such battles. Narwhal “jousting” has never been documented in the wild yet recent video footage from a drone has captured for the first time narwhals appearing to “stun” fish with their tusks.

Beyond mating, scientists are finding increasing evidence that narwhals may use their tusks to sense their surrounding environment and help catch prey. New research has provided indications that the tusks may have the ability to sense the temperature and salinity of ocean water.