Scientists from the Smithsonian and the University of Rhode Island have found unsuspected linkages between the oxidation state of iron in volcanic rocks and variations in the chemistry of the deep Earth. Not only do the trends run counter to predictions from recent decades of study, they belie a role for carbon circulating in the deep Earth. The team’s research was published May 2 in Science Express. 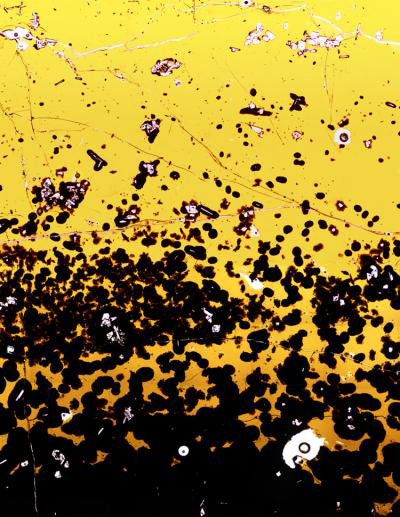 Molten magma erupted onto the seafloor freezes to glass that contains clues to its origin in Earth’s deep interior and ancient past (field of view ~1 cm). Volcanic glasses like this one may reveal a link between Earth’s oxidation state and the deep carbon cycle. (Image credit: Glenn Macpherson and Tim Gooding)

Elizabeth Cottrell, lead author and research geologist at the Smithsonian’s National Museum of Natural History, and Katherine Kelley at the University of Rhode Island’s Graduate School of Oceanography measured the oxidation state of iron, which is the amount of iron that has a 3+ versus a 2+ electronic charge, in bits of magma that froze to a glass when they hit the freezing waters and crushing pressures of the sea floor.

Due to the high precision afforded by the spectroscopic technique they used, the researchers found very subtle variations in the iron-oxidation state that had been overlooked by previous investigations. The variations correlate with what Cottrell described as the “fingerprints” of the deep Earth rocks that melted to produce the lavas—but not in the way previous researchers had predicted. The erupted lavas that have lower concentrations of 3+ iron also have higher concentrations of elements such as barium, thorium, rubidium and lanthanum, that concentrate in the lavas, rather than staying in their deep Earth home. More importantly, the oxidation state of iron also correlates with elements that became enriched in lavas long ago, and now, after billions of years, show elevated ratios of radiogenic isotopes. Because radiogenic isotopic ratios cannot be modified during rock melting and eruption, Cottrell called this “a dead ringer for the source of the melt itself.”

Carbon is one of the “geochemical goodies” that tends to become enriched in the lava when rocks melt. “Despite is importance to life on this planet, carbon is a really tricky element to get a handle on in melts from the deep Earth,” said Cottrell. “That is because carbon also volatilizes and is lost to the ocean waters such that it can’t easily be quantified in the lavas themselves. As humans we are very focused on what we see up here on the surface. Most people probably don’t recognize that the vast majority of carbon—the backbone of all life—is located in the deep Earth, below the surface—maybe even 90 percent of it.”

The rocks that the team analyzed that were reduced also showed a greater influence of having melted in the presence of carbon than those that were oxidized. “And this makes sense because for every atom of carbon present at depth it has to steal oxygen away from iron as it ascends toward the surface,” said Cottrell. This is because carbon is not associated with oxygen at depth, it exists on its own, like in the mineral diamond. But by the time carbon erupts in lava, it is surrounded by oxygen. In this way, concludes Cottrell, “carbon provides both a mechanism to reduce the iron and also a reasonable explanation for why these reduced lavas are enriched in ways we might expect from melting a carbon-bearing rock.”