Cheeseburgers. Ice cream. French fries. These are a few of the culprits, doctors warn us, responsible for atherosclerosis, a disease commonly known as hardening of the arteries. Fatty materials from richly processed modern foods accumulate along our artery walls, gradually thickening then slowing and blocking the flow of blood, causing heart attacks and stroke. Our contemporary lifestyles and eating preferences, it would appear, are killing us.

Not so fast, say the authors of a new study published recently in the journal The Lancet. Using CT scans of 137 mummies from Egypt, Peru, southwest America and the Aleutian Islands whose lives spanned some 4,000 years, the researchers turned up evidence of atherosclerosis in approximately one third. These were people who lived thousands to hundreds of years ago, experienced hard daily physical activity and were farmers, foragers and hunter-gatherers. They never came close to a milkshake or a Twinkie. Commonly assumed to be a modern disease, atherosclerosis, the study’s authors conclude “is an inherent component of human aging and not characteristic of any specific diet or lifestyle.”

This video shows the bilateral carotid, bilateral subclavian, and brachiocephalic calcification of Hatiay, a male Egyptian scribe aged 40–50 years, who lived during the New Kingdom (1570–1293 Before Common Era) and was found near modern day Luxor.

“Like grey hair and wrinkles, atherosclerosis may well be part of the aging process,” says Bruno Frohlich, an emeritus scientists at the Smithsonian’s National Museum of Natural History, one of the paper’s co-authors. “That doesn’t mean we can go out and load-up on cheeseburgers and whipped cream because diet is probably a factor. But THE major factor of this disease may simply be age. The older you get the more likely you are to have hardening of the arteries.”

Co-author Gregory S. Thomas, MD, Medical Director of the Memorial Care Heart & Vascular Institute of Long Beach Memorial Medical Center in California, warns that while some diets are better than others, one cannot count on a particular diet warding off a condition such as atherosclerosis, that may be a fundamental aspect of aging. 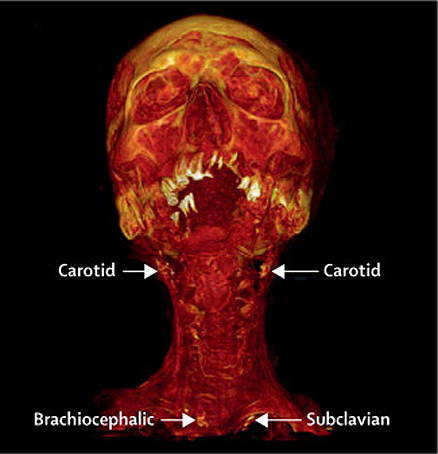 This CAT scan shows calcification in the bilateral carotid, bilateral subclavian, and brachiocephalic veins of Hatiay, a male Egyptian scribe aged 40–50 years, who lived during the New Kingdom (1570–1293 Before Common Era), and was found near modern day Luxor.

Mummies used in the study included Ancient Egyptians from the predynastic era, ca 3,100 BCE to the end of the Roman era, 364 CE; Early intermediate to late horizon peoples from present day Peru, ca. 200-1500 CE; Ancestral Puebloans of the Archaic and Basketmaker II cultures of southwest America, ca 1500 BCE to 1500 CE; and the Unangan people from the Aleutian Islands of Alaska, ca. 1756 – 1930. By examining individuals from a diversity of time periods, geographical locations and cultures the study proved that no particular life style or diet was protective against atherosclerosis, Frohlich explains.

The researchers examined five areas of the mummies’ bodies for atherosclerosis, the aorta, femoral artery in the thigh; tibial arteries in the legs; carotid arteries of the head and neck; and the heart arteries. A calcified deposit extending along the inside of an artery has a higher density than its surrounding tissue and shows up in a CT scan, Frohlich says.

The diets of the mummies the team scanned were very different, as were the climates in which they lived. Fish and game were a dietary component of all the cultures in the survey, but protein sources varied from cattle for the Egyptians to an almost entirely marine diet of the Unangans from the Aleutian Islands of Alaska. Egyptians had access to domestic cows, sheep, pigs and ducks while the Peruvians ate domesticated guinea pigs, ducks, Andean deer, birds, frogs and the plants corn, potatoes, sweet potatoes, tarwi, manioc, peanuts, beans, bananas and hot peppers.

To augment their research, a team is now taking small tissue samples from a number of the mummies to study their DNA, as well as the stable isotope signatures to reconstruct diet and get the exact age of the mummies. “From a bone sample we can get an idea of what a person was eating for the last six years of his or her life,” Frohlich says.  “A hair sample can tell us what they ate for the last 4 to 6 months. And if we take a sample of the first lower molar then we may get an idea of what the mother ate while she was pregnant with that individual,” Frohlich says.