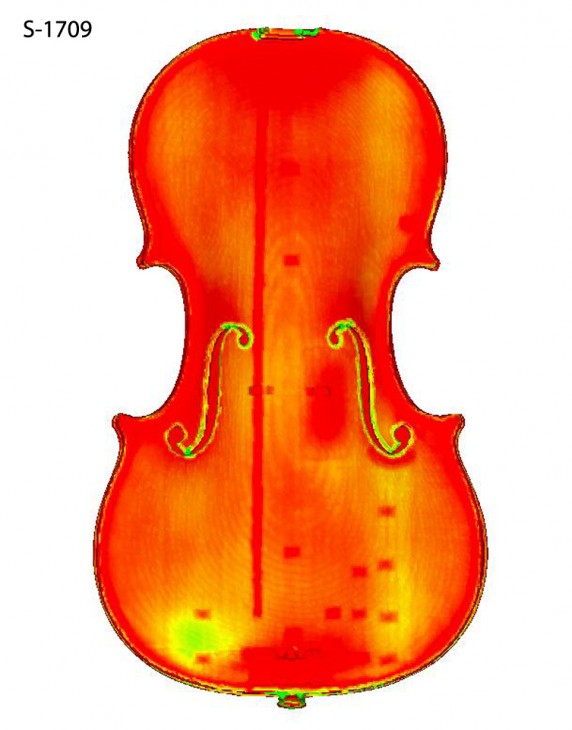 A color-enhanced image from a CT scan of a violin from the collection of the National Museum of American History that reveals the thickness of the wood  of the violin’s front as well as past repairs.

The Smithsonian’s National Museum of Natural History has pioneered the use of CT scanning technology in noninvasive scientific research. Now, with the gift of a Siemens SOMATOM Emotion 6 CT scanner from Siemens Healthcare, Smithsonian researchers are acquiring information about museum objects that is fundamentally changing the way scientists examine specimens. 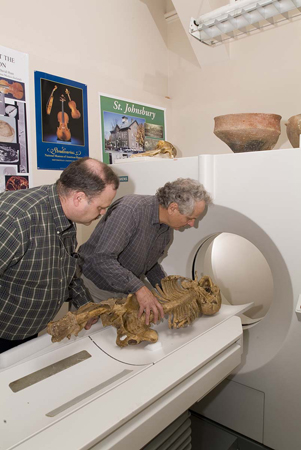 “For more than a century scientists have pursued the mysteries of the natural world through the study of specimens in Smithsonian collections,” said Cristián Samper, director of the National Museum of Natural History. “The presence of the Siemens CT scanner in our anthropology department has revolutionized the way we look at everything from mummies and dinosaur fossils to the Smithsonian’s priceless collection of Stradivarius violins. This donation and its importance to Smithsonian research are significant.”

The National Museum of Natural History is one of the world’s preeminent research institutions in the field of the natural sciences. With more than 126 million specimens in its collections—the largest in the world—the museum is a repository for examples of the diversity of life on Earth and humanity’s common heritage. Under the leadership of anthropologist Bruno Frohlich, Smithsonian scientists and curators use the CT scanner on a daily basis to enrich understanding of the natural world and people’s place in it.

Research in the Smithsonian CT laboratory focuses on employing the CT scanner with the objective of understanding and studying objects, secure in the knowledge that they can be used and studied again in the future. “Most often scientific analytical research is associated with destructive methods,” said Bruno Frohlich. “Normally we have to destroy objects in order to study them. Nondestructive and noninvasive methods, such as CT scanning, not only enable us to study objects with greater attention to detail, but also ensure the preservation of the object and leaving it intact for future generations to study.”

While the CT scanner belongs to the National Museum of Natural History and has been used extensively to study the mummy collections, it is also available for use with other Smithsonian collections. “We use CT equipment to study valuable and precious objects such as the musical instruments in Smithsonian collections,” Frohlich said. “Happily, after a study is completed, musicians can still play the instrument. This is a remarkable breakthrough for science and museum conservation.”

Research findings made possible through the use of the new CT scanner were announced at an Oct. 27 presentation to Washington, D.C., public school elementary students at the National Museum of Natural History’s public hands-on Forensic Anthropology Lab. Four high school students from the museum’s youth internship program, “Youth Engagement Through Science,” visited Frohlich’s lab to observe the CT scanner on the mummy collection. The program included remarks by Samper, Hemani, Frohlich and Spiegel.

Peruvian mummy as seen by a SOMATOM Emotion 6CT scanner