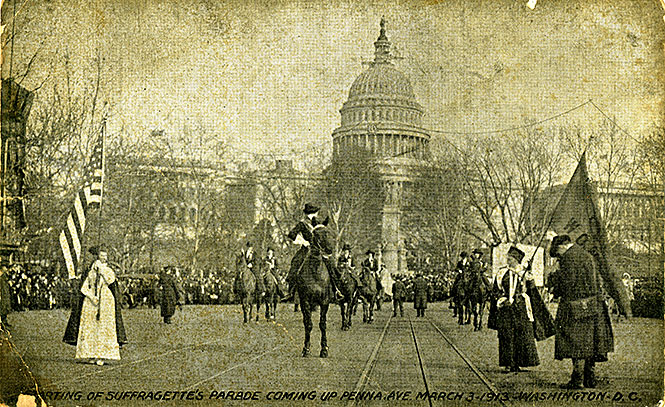 On March 3, 1913, 5,000 women marched up Pennsylvania Avenue demanding the right to vote. Their “national procession,” staged the day before Woodrow Wilson’s presidential inauguration, was the first civil rights parade to use the nation’s capital as a backdrop, underscoring the national importance of their cause and women’s identity as American citizens.

The event brought women from around the country to Washington in a show of strength and determination to obtain the ballot. The extravagant parade—and the near riot that almost destroyed it—kept woman suffrage in the newspapers for weeks.

“The National Woman Suffrage Parade, 1913” display recreates the mood of the parade and illustrates its impact using costumes worn by participants along with banners, sashes, letters, photographs and postcards like the one shown here. To see more inspirational women in history, visit the Smithsonian Institution Archives’ Women’s History Month blog post.

This item is one of 137 million artifacts, works of art and specimens in the Smithsonian’s collection. It is currently on display in “The National Woman Suffrage Parade, 1913” at the National Museum of American History. To learn more about this historic event, visit the related website.