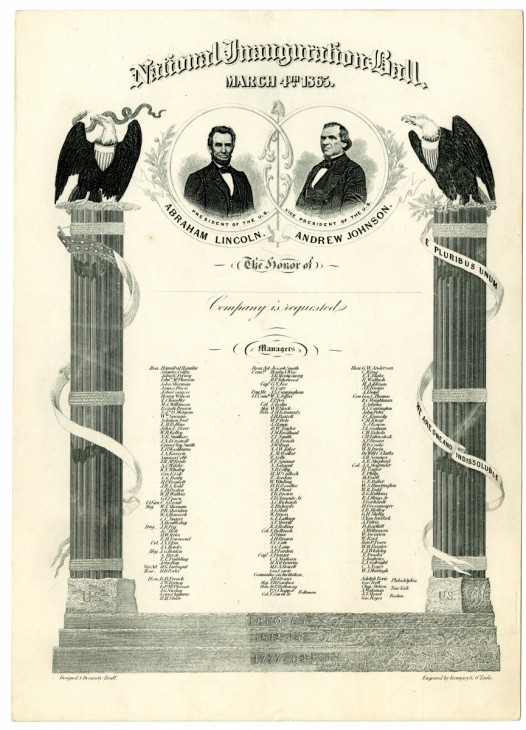 As the U.S. prepares to celebrate the 57th presidential inauguration, here is a peek into the evening of President Abraham Lincoln’s 1865 inauguration celebration. This Smithsonian Snapshot marks Inauguration Day with an original 1865 invitation to President Lincoln’s National Inauguration Ball.

On Nov. 8, 1864, with the Civil War in its final stages, President Lincoln was elected for a second presidential term.

On the evening of March 6, 1865, and only six weeks before President Lincoln’s assassination at nearby Ford’s Theatre, a $10 ticket admitted “one gentleman and two ladies” to his second inaugural ball, held in the elegant building that now contains the Smithsonian American Art Museum.

The honor of company was requested by President Lincoln and Vice President Andrew Johnson through this paper invitation to the National Inauguration Ball. Engraved by Demsey & O’Toole, the invitation includes the inaugural ball committee managers listed in three columns.

To learn more about what it was like to attend President Lincoln’s inaugural ball, read Smithsonian Magazine’s blog post describing that special night. Watch a behind-the-scenes video of the making of the National Museum of American History’s First Ladies exhibition, featuring Michelle Obama’s inaugural gown designed by Jason Wu.

This item is one of 137 million artifacts, works of art and specimens in the Smithsonian’s collection. It is currently on display in the “American Presidency” exhibition. To learn more about this item, visit the National Museum of American History website.

Marcia Ball at the Folklife Festival