Smithsonian Conservation Biology Institute scientists and partners have determined there is more to the shape and length of bird bills than just how they “get the worm.” According to their research published in two papers this week, bill size is not only influenced by available food, but another basic need: water.

In the first study, published July 23 in PLoS ONE, the researchers compared two subspecies of song sparrows living in different habitats and found that bill size varies according to climate. Sparrows living in hotter, drier conditions had larger bills, which gave them more surface area to lose heat, thus saving water. The study explains how bird bills act like “radiators,” keeping sparrows cool so that they do not get dehydrated. “Our mothers were right when they told us that water is the best thing for you,” said Russell Greenberg, head of SCBI’s Migratory Bird Center and lead author of the study. “We always think about food and fixate on food. But whenever we go out running, we can leave the candy bar behind, but we’ve got to have water. We think about birds as little feeding machines, but they have to deal with climate and water, too.” 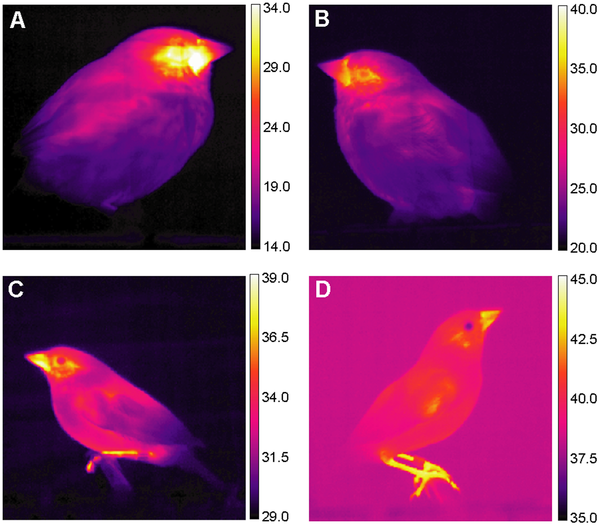 The study’s authors used the thermal data room at the Smithsonian’s National Zoo to take photographs at different temperatures of song sparrows caught in the wild. The images indicated that sparrows from hot, dry environments with less water available lost 33 percent more heat from their bills than other sparrows. In turn, this heat loss allowed them to save about 7.7 percent of their water needs. Scientists believe these heat and water benefits could give song sparrows in hot environments more energy to spend elsewhere. Instead, birds could take an extra hour for breeding, gathering food, defending territory or singing.

In the second study, to be published July 27 in Evolution, researchers focused on how bill size changes according to climate differences within California specifically. The scientists measured song sparrow bills from three general locations: the coast and islands, the interior and the eastern desert. They found that sparrows from the warmer interior had larger bills than those from the cooler coastline. As expected, the bills become smaller again when temperatures are extremely hot (higher than body temperature), according to the study. Their research builds on the results of the PLoS ONE paper and encourages further study on bird bill heat loss.

This research highlights the importance of heat loss for bird conservation efforts, especially in light of climate change, Greenberg said. While song sparrows are listed as a species of least concern by the International Union for Conservation of Nature, the study found that climate could directly affect bird life. As global temperatures rise, birds will have a harder time adapting to conditions.

“Climate is a big factor directly shaping animals,” Greenberg said. “Song sparrows don’t have air-conditioning and even going in the shade isn’t going to help. They’re out there with whatever their legs, bill and feathers can do to keep them warm or cool. Whatever they can do to save water, they have to do it and this is going to be even more essential in the face of global warming.”

In the next step of the research, Greenberg hopes to study heat loss and food availability at the same time, in order see how influential each factor is on bill size and shape. He also aims to test bird species living in other types of habitats and look more closely at the benefits of having a larger bill.

In addition to Greenberg, the PLoS ONE paper’s other authors are Raymond M. Danner, SCBI scientist, and Viviana Cadena and Glenn Tattersall from the Department of Biological Sciences at Brock University. The Evolution paper’s authors are Greenberg and Danner.