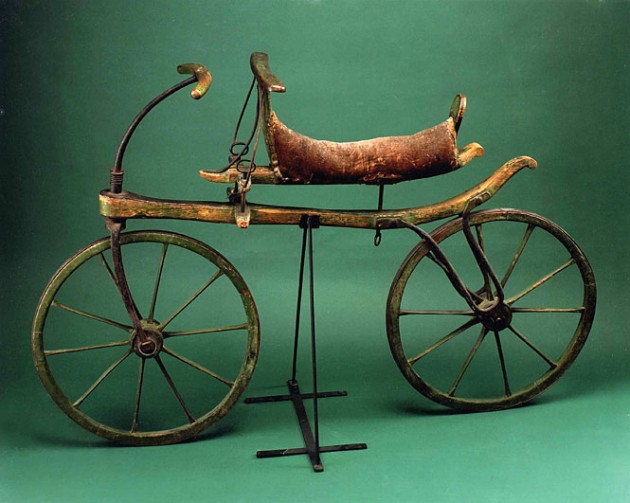 This week’s Smithsonian Snapshot celebrates National Bike Month with the forerunner of the modern bicycle: this ca. 1818 draisine.

In 1817, Karl Drais, a young inventor in Baden, Germany, designed and built a two-wheeled, wooden vehicle that was straddled and propelled by walking swiftly. Drais called it the laufmaschine or “running machine.”

A forester for the Grand Duke of Baden, Drais used his laufmaschine to inspect the Duke’s forest. The laufmaschine soon became a novelty among Europeans, who named it the “draisine.”

By 1818, the draisine craze reached the United States. Charles Wilson Peale, a well-known portrait artist, helped to popularize the draisine by displaying one in his museum in Philadelphia. Many American examples were made, and rentals and riding rinks became available in Eastern cities.

By 1820, the high cost of the vehicle, combined with its lack of practical value, limited its appeal and made it little more than an expensive toy. The two-wheeled vehicle would not become sustained until pedals were added in the late 1800s.

Donated to the Smithsonian in 1964, this draisine is the oldest cycle in its collection of 61 cycles. They reflect social trends and technological developments that have shaped the growth and popularity of riding since 1818.

To view more bicycles, motorcycles, automobiles and other vehicles at the Smithsonian, visit the National Museum of American History’s “America on the Move” exhibition.

This item is one of 137 million artifacts, works of art and specimens in the Smithsonian’s collection. It is not on display. To learn more about this item, visit the National Museum of American History’s website.