Panda habitat to be lost, shifted by climate change

Fewer than 1,600 giant pandas are left in the mountain forests of central China. Now a new study published in the International Journal of Ecology by scientists at the Smithsonian Conservation Biology Institute at the National Zoological Park, predicts that 16,000 square kilometers of giant panda habitat will likely be lost by the year 2080 as climate change causes panda habitat systems to shift to higher elevations and latitudes. 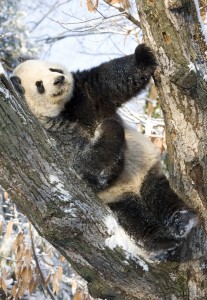 In other words, less than half of the giant panda’s already decreased habitat will be suitable to sustain them in 70 years. The research team used two different global climate models to make this prediction, taking into account remaining habitat, lost habitat, potential new habitat and current protected areas for giant pandas.

The study also found that habitat fragmentation will likely increase, leading to smaller areas that can support fewer pandas farther away from each other, increasing the risks of inbreeding and population collapse.

“Our research predicts that climate change will substantially decrease the amount of suitable giant panda habitat within the species’ current distribution,” said Melissa Songer, lead author of the paper and an SCBI wildlife ecologist. “But also we may see new areas becoming suitable for giant pandas,” Songer adds. “The question remains as to whether giant pandas will have the capacity and opportunity to shift to new areas.” 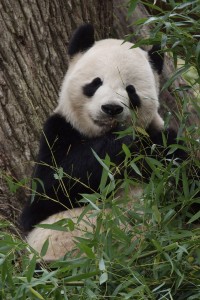 In addition to calling for the development of more protected areas that are aligned with climate predictions, the paper emphasizes the importance of creating corridors to reduce fragmentation. The study also has land-use implications, as agricultural land and land near human settlements are unsuitable for pandas.

In addition to Songer, the authors of the panda ecology study from SCBI are Melanie Delion and Alex Biggs. The partnering author is Qiongyu Huang in the geography department at the University of Maryland. Friends of the National Zoo helped fund this research.