When most people look at a forest, they see walking trails, deer yards, or firewood for next winter. But scientists at the Harvard Forest and the Smithsonian take note of changes imperceptible to the naked eye — the uptake and storage of carbon. What they’ve learned in a recent study is that an immense amount of carbon is stored in growing trees, but if current trends in Massachusetts continue, development would reduce that storage by 18 percent over the next half century. Forest harvesting would have a much smaller impact. 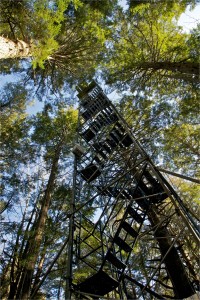 Jonathan Thompson is Research Ecologist at the Smithsonian Conservation Biology Institute, Research Associate at the Harvard Forest, and lead author on the paper which appeared in the journal Ecological Applications in late 2011. “The rebounding forests of New England provide a tremendous public benefit by storing carbon that would otherwise contribute to climate change,” said Thompson. To put these findings into context he adds, “In Massachusetts, forests capture approximately 2.3 million metric tons of carbon each year. That’s equal to the amount of carbon dioxide emitted from the energy used by one million American homes annually.” He and his coauthors were able to estimate the extent to which development may chip away at that carbon sink, using an uncommon collection of long-term data and a distinct form of research known as scenario science.

Image right: From this 71-foot eddy-flux tower in a 200-year-old hemlock forest, Harvard Forest scientists have measured carbon dynamics and other ecosystem processes for more than 20 years as part of the Long-Term Ecological Research program. Located in a 35-hectare Smithsonian Global Earth Observatory plot and part of the core measurements for the National Ecological Observatory Network, this tower is a focal point for studies of the eastern hemlock tree and its impending demise from the invasive hemlock wolly adelgid, as well as phenology studies of succeeding hardwoods.
(Photos by David Foster)

For more than 30 years, scientists at the Harvard Forest have scaled towers into the forest canopy and measured the trunks of trees to track how much carbon is stored or lost from the woods each year. This treasure trove of data is part of the national Long-Term Ecological Research (LTER) Network, which is celebrating more than three decades of research this month. This important milestone is marked by six new papers released today in a special issue of the journal BioScience. The forest carbon research is one example of participatory scenario science — a growing trend in ecology featured in a paper by Thompson, David Foster, Director of the Harvard Forest, and their colleagues in the BioScience issue. 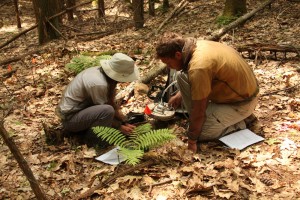 Harvard Forest is one of four LTER sites in the northeastern U.S. and was awarded a grant by the National Science Foundation to join the Network in 1988. David Foster coauthored the Ecological Applications paper of 2011 and co-edited the new BioScience special issue. He notes, “With three decades of data meticulously collected as part of the LTER Network, we have reached a crucial transition where we are now able to tackle major environmental challenges, such as the fate of forest carbon, across large landscapes.”

Foster adds, “Over the last two centuries, forests have stored more carbon with each passing year in many parts of New England, but the turning point may be in sight for Massachusetts and other urbanizing landscapes if recent development trends continue.” But that’s not the end of the story for Foster: “The good news is that forests are resilient and history is not necessarily destiny. Our research makes a compelling case for expanding support for forestland protection and for the efforts of private landowners to keep their land forested. It reminds us that forests provide important infrastructure that we should invest in, just as we do major civil works projects.”

Effects of human impact are long lasting for forests in Northeast U.S.