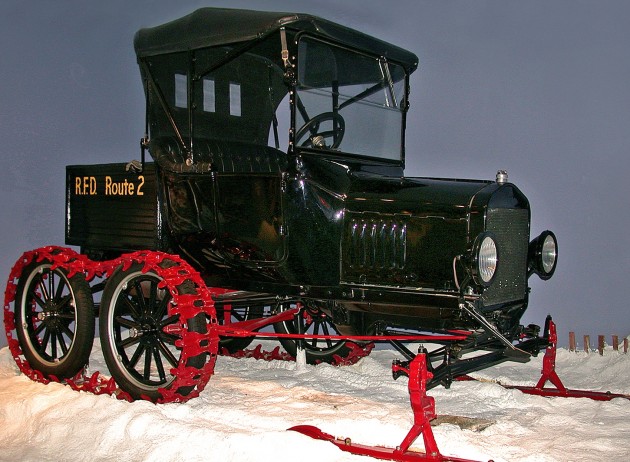 In the early 20th century, rural mail carriers who purchased automobiles for their routes learned quickly that their new cars were often no match for deep snow.

In 1906, Virgil White began converting automobiles into snowmobiles by replacing the front tires with skis and the rear tires with caterpillar treads, allowing the vehicle to move easily over snow and ice. The attachment, name Snowbird, saved carriers the expense of purchasing and maintaining a horse and sled for winter deliveries.

By 1922, White began selling his kit for $250 to $400 from his snowmobile company in West Ossippe, N.H. A few years later, he sold his snowmobile patents to the Farm Specialty Manufacturing Co. of New Holstein, Wis., which quickly recognized the kit’s appeal to rural carriers and advertised it as the “Mailman’s Special.” It was promoted as easy to install.

This 1921 Ford Model T was owned by rural mail carrier Harold Crabtree of Central Square, N.Y. The vehicle is fitted with the “Mailman’s Special.”