Females can place limits on evolution of attractive features in males, research shows

Female cognitive ability can limit how melodious or handsome males become over evolutionary time, biologists from The University of Texas at Austin, Louisiana State University Health Sciences Center and the Smithsonian Tropical Research Institute have observed. 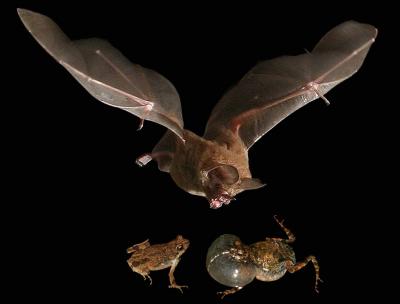 Female túngara frogs have a limited cognitive ability to recognize increasing elaboration in male mating calls. Fringe-lipped bats that hunt the singing males also have a limited cognitive ability to notice increases in male call complexity. So, the evolution of increasing complexity in male calls is limited by decreased female response rather than increased predation. (Photo composite by Michael Teague O’Mara. Photos by A. Baugh, K. Lampert and A. Lang)

Males across the animal world have evolved elaborate traits to attract females, from huge peacock tails to complex bird songs and frog calls. But what keeps them from getting more colorful feathers, longer tails, or more melodious songs? Predators, for one. Increased elaboration can draw predators in, placing an enormous cost to males with these sexy traits.

In a new paper appearing this week in Science, a group of biologists have shown that females themselves can also limit the evolution of increased elaboration.

“We have shown that the female túngara frog brains have evolved to process some kinds of information and not others,” says biologist Mike Ryan of the Smithsonian Tropical Research Institute and University of Texas at Austin, “and that this limits the evolution of those signals.”

Imagine looking at a group of five oranges next to a group of six. At a glance, you would quickly notice that one group has one more orange than the other. Now, imagine looking at a pile of 100 oranges next to a pile of 101. It would be nearly impossible for you to notice the difference in size (one orange) between those two piles at a glance. This is known as Weber’s Law, which states that stimuli are compared based on proportional differences rather than absolute differences (one orange in the case above).

In túngara frogs, males gather en masse to attract female frogs with a call that is made up of a longer “whine” followed by one or more short “chucks.”

Through a series of experiments conducted in Panama, Ryan and his collaborators found that females prefer male calls with the most chucks, but their preference was based on the ratio of the number of chucks. As males elaborate their call by adding more chucks, their relative increase in attractiveness decreases due to a perceptual constraint on the part of females.

Male túngara frog calls also attract a predator: the frog eating fringe-lipped bat. To confirm that male song elaboration wasn’t limited by these predators, the researchers also studied how the bats respond to additional “chucks” in the male call.

They discovered that hunting bats choose their prey based on chuck number ratio, just as the female frogs do. So, as males elaborate their call by adding chucks, the relative increase in predation risk decreases with each additional chuck.

“What this tells us is that predation risk is unlikely to limit male call evolution,” says Karin Akre, lecturer at The University of Texas at Austin. “Instead, it is the females’ cognition that limits the evolution of increasing chuck number.”