During a press conference Friday, July 22 at the Smithsonian’s National Air and Space Museum, NASA announced that Gale Crater will be the landing site for the Mars Science Laboratory. Scheduled to launch in late 2011 and arrive at Mars in August 2012, the Mars Science Laboratory is a rover that will assess the planet’s “habitability”—if it ever was, or is today, an environment able to support microbial life. 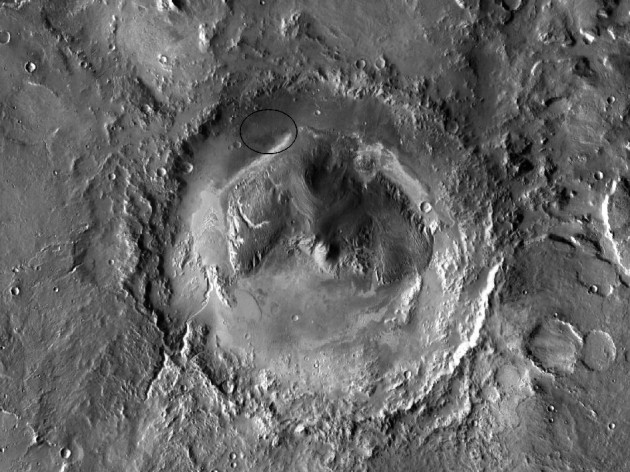 Gale Crater is 96 miles in diameter and holds a layered mountain rising about 3 miles above the crater floor. The portion of the crater within the planned landing area north of the mountain has an alluvial fan likely formed by water-carried sediments. The lower layers of the nearby mountain–within driving distance for Curiosity–contain minerals indicating a wet history. (Image NASA/JPL-Caltech/ASU)

“Having the right instruments and knowing where to go are equally important,” said John Grant, a Smithsonian geologist and co-chair of the landing site steering committee. “We looked for a site that has water associated with it, materials of interest that are concentrated and preserved and that is accessible so we can get to it. Gale Crater is a good place to explore because there is a mountain of layered materials rising from its floor. Much like chapters in a book, the sediments, minerals and layers in this stack record the story about what Mars was like in the past. The rover will investigate where sediments forming the layers came from and explore how the layers relate to the environments in which they formed.” Grant, who is a researcher in the Center for Earth and Planetary Studies, is also a member of the science team for Mars rovers Spirit and Opportunity.

The car-sized Mars Science Laboratory, or Curiosity, is scheduled to launch late this year and land in August 2012. The target crater is 96 miles in diameter and holds a mountain rising higher from the crater floor than Mount Rainier rises above Seattle. Gale is about the combined area of Connecticut and Rhode Island. Layering in the mound suggests it is the surviving remnant of an extensive sequence of deposits. 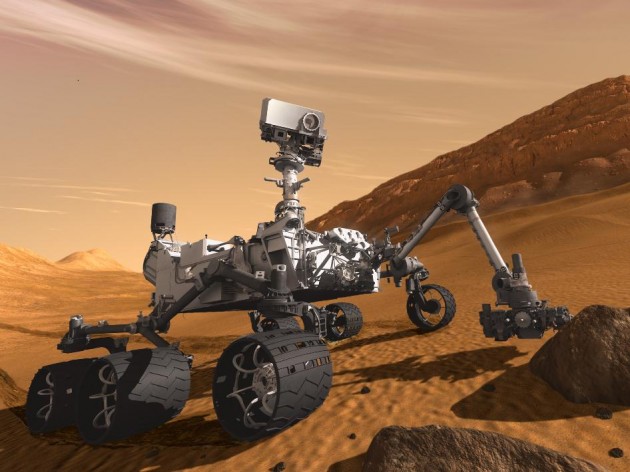 This artist concept shows NASA’s Mars Science Laboratory Curiosity rover, a mobile robot for investigating Mars’ past or present ability to sustain microbial life. In this picture, the rover examines a rock on Mars with a set of tools at the end of the rover’s arm, which extends about 7 feet. (Image NASA/JPL-Caltech)

During a prime mission lasting one Martian year—nearly two Earth years—researchers will use the rover’s tools to study whether the landing region had favorable environmental conditions for supporting microbial life and for preserving clues about whether life ever existed.

In 2006, more than 100 scientists began to consider about 30 potential landing sites during worldwide workshops. Four candidates were selected in 2008. An abundance of targeted images enabled thorough analysis of the safety concerns and scientific attractions of each site. A team of senior NASA science officials then conducted a detailed review and unanimously agreed to move forward with the MSL Science Team’s recommendation. The team is comprised of a host of principal and co-investigators on the project.

Curiosity is about twice as long and more than five times as heavy as any previous Mars rover. Its 10 science instruments include two for ingesting and analyzing samples of powdered rock that the rover’s robotic arm collects. A radioisotope power source will provide heat and electric power to the rover. A rocket-powered sky crane suspending Curiosity on tethers will lower the rover directly to the Martian surface.

The rover and other spacecraft components are being assembled and are undergoing final testing. The mission is targeted to launch from Cape Canaveral Air Force Station in Florida between Nov. 25 and Dec. 18. NASA’s Jet Propulsion Laboratory in Pasadena manages the mission for the agency’s Science Mission Directorate in Washington. JPL is a division of Caltech.