Whole-genome analysis at center of effort to save Tasmanian devil

Whole-genome analysis of two Tasmanian devils—one that died of a new contagious cancer known as Devil Facial Tumor Disease (DFTD) and one healthy animal—is at the center of a new management strategy to help prevent the extinction of this species. Under this novel plan, scientists have developed a theoretical model using the animal’s DNA to predict which individuals should be kept in captivity to preserve enough genetic diversity for the species to survive. 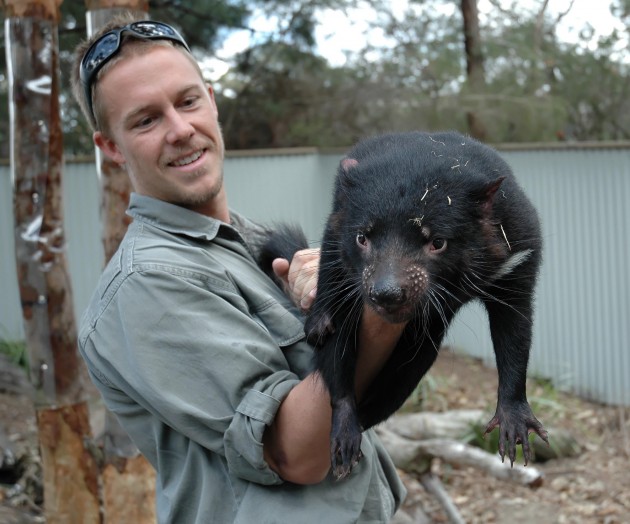 At a facility in Australia zoo keeper and breeder Tim Faulkner holds a Tasmanian devil–an endangered marsupial found in the wild in the Australian island-state of Tasmania. (Photos by Stephan C. Schuster, Penn State)

If a number of healthy Tasmanian devils are kept in zoos and other facilities in “protective custody” until the tumor runs its course and disappears in the wild, then the captive animals could be released back into their former habitat to re-establish their species.

Published June 27 in the journal Proceedings of the National Academy of Sciences the study was authored by a team of scientists led by Penn State University’s Stephan Schuster, professor of biochemistry and molecular biology, and Webb Miller, professor of biology and computer science and engineering; and Vanessa Hayes of the Venter Institute in San Diego. Other co-authors included Kristofer Helgen, curator at the Smithsonian’s National Museum of Natural History, and scientists at institutions and universities in Australia, Denmark, and the United States. The study represents one possible plan of action to save the Tasmanian devil—a marsupial found in the wild exclusively in the Australian island-state of Tasmania. DFTD, which disfigures the victim and causes death from starvation or suffocation within months, is an unusual cancer first observed just 15 years ago. 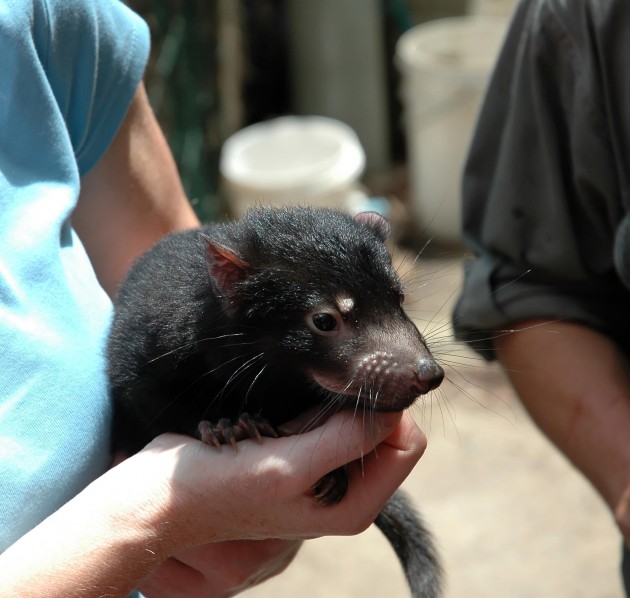 Successful breeding efforts are underway in mainland Australia and Tasmania to preserve a captive population of Tasmanian devils that are free from Devil Facial Tumor Disease.

“The disease is like nothing we know in humans or in virtually any other animal. It acts like a virus but it actually is spread by a whole cancerous cell that arose in one individual several decades ago,” Schuster explains. “This malignant cell is transferred directly from one individual to another through biting, mating, or even touching.” 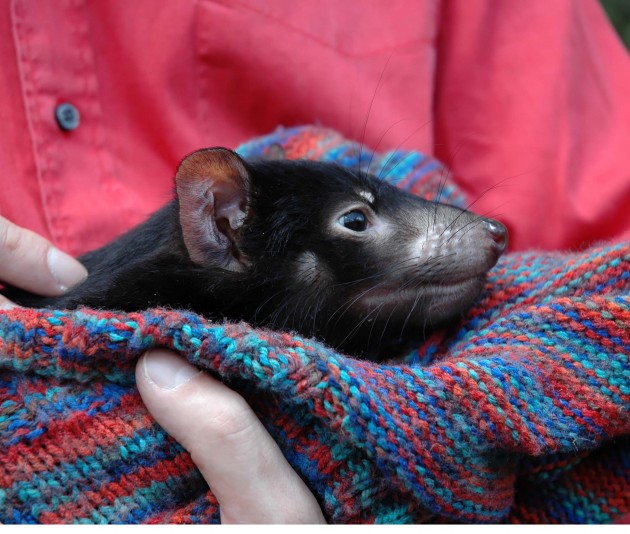 A team of Penn State University researchers have used genetic data to formulate a plan of action to prevent the extinction of the Tasmanian devil.

The conservation strategy, explains Webb Miller, is “not just a matter of scooping up a few individuals at random and locking them away. Our team developed a smarter, more calculated approach: We asked ourselves, which individuals would be the best candidates for ‘protective custody,’ and what criteria would we use to make those determinations? We soon realized that the answer was to compile genetic data and to analyze it in novel ways.”

The team approached the extinction problem on two fronts. The first was to sequence the complete genomes—3.2 billion base pairs each—of two individual Tasmanian devils. One was a male “Cedric,” who had a natural resistance to two strains of DFTD, but succumbed after being infected with a different strain of the disease last year. The other was a female “Spirit,” who contracted DFTD in the wild. In addition, the scientists sequenced the genome of one of Spirit’s tumors.

Because the two animals had originated in the extreme northwest and southeast regions of Tasmania, respectively, they represented the maximal geographic spread of the species — a measure that is used as an approximation of genetic diversity.

The researchers then began an analysis of the genomic data from the two animals, and of the genetic characteristics of the tumor. Using these data, they created a model that could determine which individual animals should be selected for captive breeding programs, such as the ones currently underway in Tasmania and on mainland Australia.

The second aspect of the project was to learn how much genetic diversity had been lost since Europeans settled Tasmania in 1803. To do this, the scientists analyzed a large number of genetic markers from an additional 175 Tasmanian devils, some of which were museum specimens from the Smithsonian’s National Museum of Natural History in Washington, D.C. and the Natural History Museum in London. Schuster explained that this approach to genomic research, which he named “museomics,” is unique and brimming with potential.

“Museums are treasure troves of specimens collected in the last 250 years,” Schuster said. “And, in fact, we can get DNA from hair shafts of a museum specimen.” Schuster explained that DNA collection from hair is virtually non-destructive; museum specimens are not damaged visually in the process of removing just a few hairs.

After analyzing the 175 individuals, the scientists learned that the genomic diversity of the Tasmanian devil, while low, has not decreased much over the last century.

“This is an important finding because it means that DFTD is not to blame for any lack of genetic diversity since the disease appeared only 15 years ago,” Miller explained. “It’s crucial that we act as responsible stewards for the species, helping maintain what little genetic diversity it had before the DFTD epidemic struck.”

Breeding efforts are underway in mainland Australia and Tasmania to preserve a captive population of Tasmanian devils that are free from Devil Facial Tumor Disease.

More information on this project can be found at the Tasmanian Devil Genome Project website.