An international team of astronomers has revealed details of a “super-exotic” exoplanet that would make the planet Pandora in the movie Avatar pale in comparison.

The planet, named 55 Cancri e, is 60 per cent larger in diameter than Earth but eight times as massive. Twice as dense as Earth–almost as dense as lead–it is the densest solid planet known, according to a team led by astronomers from the Massachusetts Institute of Technology, the University of British Columbia, the Harvard-Smithsonian Center for Astrophysics and the University of California at Santa Cruz. 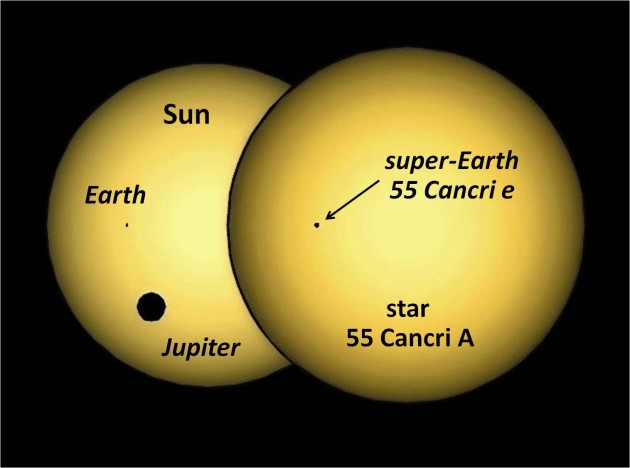 Family portraits of two planetary systems: A simulation of the silhouette of planet 55 Cancri e passing in front of (“transiting”) its parent star, compared to the Earth and Jupiter transiting our Sun, as seen from outside the Solar System. The MOST space telescope detected the tiny dip in starlight caused when the super-Earth planet blocked a small portion of the disk of the star 55 Cancri A, which is nearly a twin to the Sun. (Credit: Jason Rowe, NASA Ames and SETI Institute and Prof. Jaymie Matthews, UBC)

The research, based on observations from Canada’s MOST (Microvariability & Oscillations of STars) space telescope, was released online April 28, 2011 at arXiv.org and has been submitted for publication in The Astrophysical Journal Letters. MOST is a Canadian Space Agency mission.

Approximately 40 light years from Earth, 55 Cancri e orbits a star – called 55 Cancri A–so closely that its year is less than 18 hours long. “You could set dates on this world by your wrist watch, not a calendar,” says UBC astronomer Jaymie Matthews. 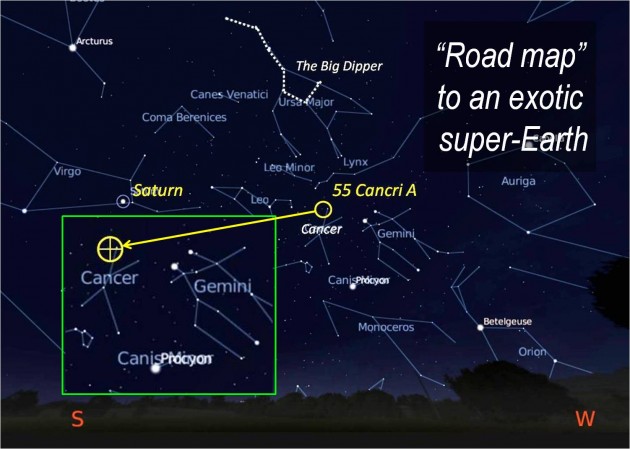 How to point to an alien world tonight: Amateur exoplanet hunters in North America and Europe can go outside,  and see the star 55 Cancri A for themselves. Around 10 p.m. local time, look southwest, below the Big Dipper, near the northern tip of the brightest stars in the constellation Cancer (the Crab). This view of the sky shown is from Vancouver, Canada, on the night of 28 April 2011, but the view will be similar for all mid-northern latitudes. Click photo to enlarge. ( Credit: Stellarium and Prof. Jaymie Matthews, UBC.)

The temperature on the planet’s surface could be as high as 2,700 degrees Celsius. “Because of the infernal heat, it’s unlikely that 55 Cancri e has an atmosphere,” says lead author Josh Winn of MIT. “So this is not the type of place where exobiologists would look for life.”

However, 55 Cancri e is the type of place exoplanetary scientists will be eager to “visit” with their telescopes, says Winn. “The brightness of the host star makes many types of sensitive measurements possible, so 55 Cancri e is the perfect laboratory to test theories of planet formation, evolution and survival.”

While the planet isn’t visible, even through a telescope, its host star, 55 Cancri A, can be observed with the naked eye for the next two months on a clear dark night.

“On this world – the densest solid planet found anywhere so far, in the Solar System or beyond – you would weigh three times heavier than you do on Earth. By day, the sun would look 60 times bigger and shine 3,600 times brighter in the sky,” says Matthews, MOST Mission Scientist and second author on the paper. 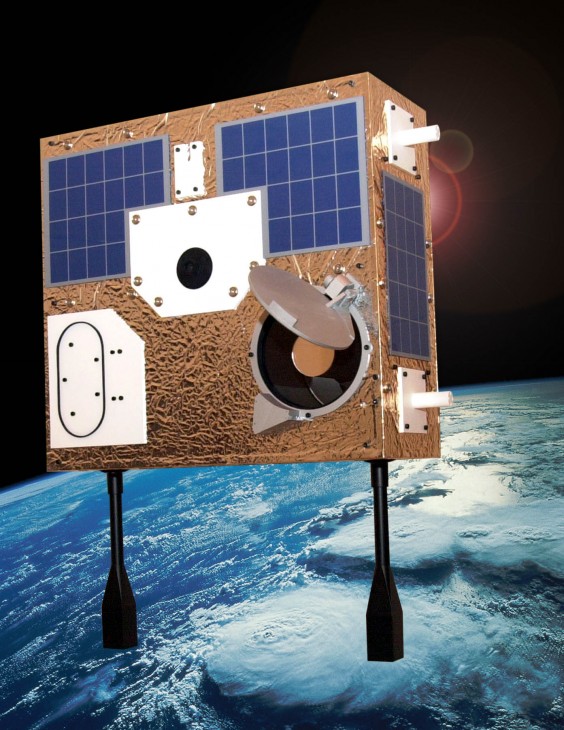 Canada’s space telescope, MOST, which detected the transits of the super-Earth exoplanet 55 Cancri e. (Credit: Canadian Space Agency and the MOST Team.)

The first planet discovered around 55 Cancri A – designated “b” – was found by a California-based team in 1997. Over the next five years, two more planets (“c” and “d”) were found by the same team around the star. In 2004, a Texas-based team found 55 Cancri e, the subject of the latest paper. (A fifth planet, f, was discovered in 2008).

All five planets were detected using the Doppler technique, where a star’s “wobbles” due to the gravities of its unseen planets are measured in the shifting wavelengths of the spectra of the starlight.

Last year, Rebekah Dawson, an astronomy PhD student at Harvard and Daniel Fabrycky, a Hubble Fellow at UCSC, re-analyzed the data and proposed that the orbital period of 55 Cancri e could be much shorter than others had assumed.

MIT’s Winn, along with Smithsonian astronomer Matt Holman, brought the problem to Matthews, who ordered the astronomical equivalent of a police stakeout using MOST, which was able to detect subtle dips in the brightness of star 55 Cancri A as planet e passed in front of it during each orbit.

The research team found that these “transits” occur like clockwork every 17 hours and 41 minutes, just as Dawson and Fabrycky predicted. The starlight is dimmed by only 1/50th of a per cent during each transit, telling the astronomers that the planet’s diameter is about 21,000 km – only 60 per cent larger than Earth.

“It’s wonderful to be able to point to a naked-eye star and know the mass and radius of one of its planets, especially a distinctive one like this,” says Winn.

Matthews agrees. “That’s the kind of thing Captain Kirk would do in an old episode of Star Trek, we’re finally catching up with – maybe starting to surpass – the science fiction I dreamed about as a kid.”–University of British Columbia