In December astronomers discovered a “super-Earth” orbiting a red dwarf star 40 light-years from Earth. They found the distant planet with a small fleet of ground-based telescopes no larger than those many amateur astronomers use in  their backyards. Although the super-Earth is too hot to sustain life, the discovery shows that current, ground-based technologies are capable of finding almost-Earth-sized planets in warm, life-friendly orbits.The discovery was published in the December 17 issue of the journal Nature.A super-Earth is defined as a planet between one and ten times the mass of the Earth. The newfound world, GJ1214b, is about 6.5 times as massive as the Earth. Its host star, GJ1214, is a small, red type M star about one-fifth the size of the Sun. It has a surface temperature of only about 4,900 degrees F and a luminosity only three-thousandths as bright as the Sun. 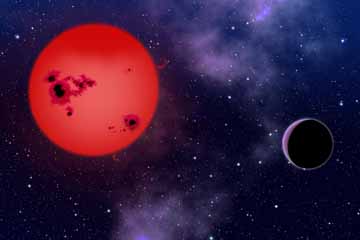 GJ1214b orbits its star once every 38 hours at a distance of only 1.3 million miles. Astronomers estimate the planet’s temperature to be about 400 degrees Fahrenheit. Although warm as an oven, it is still cooler than any other known transiting planet because it orbits a very dim star.

Since GJ1214b crosses in front of its star, astronomers were able to measure its radius, which is about 2.7 times that of Earth. This makes GJ1214b one of the two smallest transiting worlds astronomers have discovered (the other being CoRoT-7-b). The resulting density suggests that GJ1214b is composed of about three-fourths water and other ices, and one-fourth rock. There are also tantalizing hints that the planet has a gaseous atmosphere.

“Despite its hot temperature, this appears to be a waterworld,” said Zachory Berta, a graduate student at the Harvard-Smithsonian Center for Astrophysics (CfA) who first spotted the hint of the planet among the data. “It is much smaller, cooler, and more Earthlike than any other known exoplanet.” 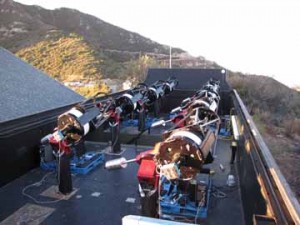 Berta added that some of the planet’s water should be in the form of exotic materials like Ice VII (seven) – a crystalline form of water that exists at pressures greater than 20,000 times Earth’s sea-level atmosphere.

Astronomers found the new planet using the MEarth (pronounced “mirth”) Project – an array of eight identical 16-inch-diameter RC Optical Systems telescopes that monitor a pre-selected list of 2,000 red dwarf stars. Each telescope perches on a highly accurate Software Bisque Paramount and funnels light to an Apogee Alta U42 camera containing a charge-coupled device (CCD) chip, which many amateurs also use.

“Since we found the super-earth using a small ground-based telescope, this means that anyone else with a similar telescope and a good CCD camera can detect it too. Students around the world can now study this super-earth!” said David Charbonneau of CfA, lead author and head of the MEarth project.

In contrast, a super-Earth transiting a small, red dwarf star yields a greater proportional decrease in brightness and a stronger signal detectable from the ground. Astronomers then use instruments like the HARPS (High Accuracy Radial Velocity Planet Searcher) spectrograph at the European Southern Observatory to measure the companion’s mass and confirm it is a planet, as they did with this discovery.