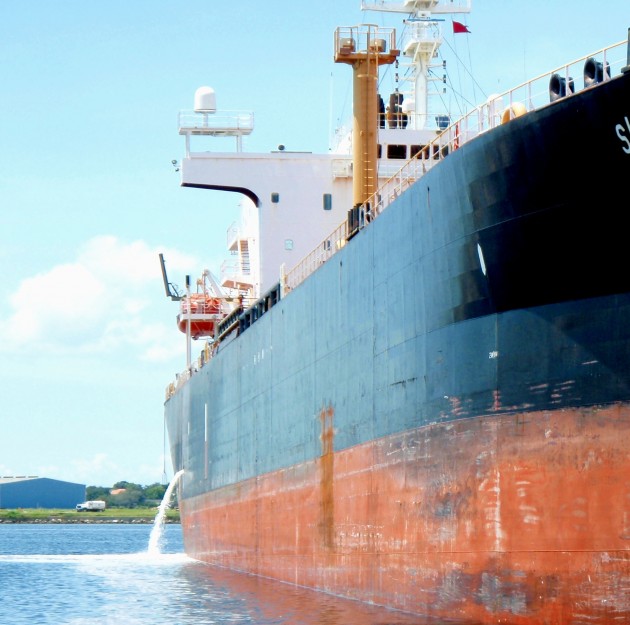 A ship pumping out its ballast water into a harbor. (Photo:  Maritime Environmental Resource Center)

Ballast water taken up by ships in coastal waters teems with plankton and microbes. When discharged at the next port of call, these hitchhikers can wreak havoc on receiving ecosystems. Under current federal regulations, ships exchange their ballast water in the open ocean to flush out unwanted species. However, some survive the process, and not all ships travel across oceans. Environmental regulators have known about this problem for decades. But while regulators check ship records and can sometimes test salinity to verify compliance, unlike many pollutants, there are no federal requirements limiting the number of viable, potentially dangerous organisms.

That is about to change. The U.S. Coast Guard has proposed a new set of rules limiting the number of organisms allowed, in line with current International Maritime Organization standards. For larger zooplankton (length, width or height at least 50 microns, or one-half the thickness of a piece of paper), the number must be fewer than 10 viable organisms per cubic meter (264 gallons). On-board ballast water treatment technologies offer a promising solution, enabling ships to substantially cut the risk of delivering dangerous species. But while a few systems have entered the market, the challenge of testing the ballast water—and the technology—remains. A major stumbling block is simply understanding how such testing should occur and how much ballast water must be tested in order to count very sparse numbers of organisms. 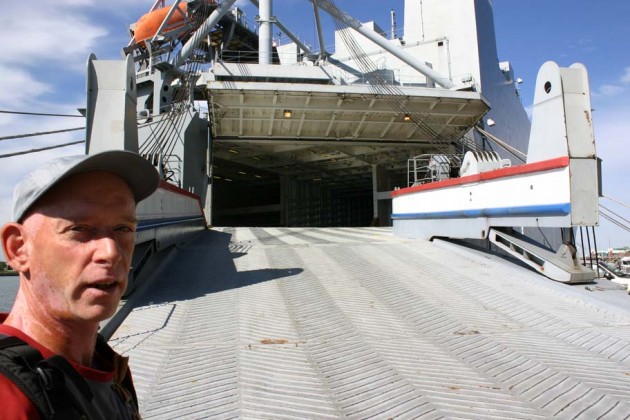 George Smith, a scientist at the Smithsonian Environmental Research Center, with the ship Cape Washington in the background in Baltimore Harbor. (Photo by Tina Tennessen)

To help regulators and engineers develop and test such treatment systems, and ultimately enforce these standards, a team of researchers developed a statistical model to see how to count small, scarce organisms in large volumes of water accurately. Led by Whitman Miller, research ecologist at the Smithsonian Environmental Research Center, the scientists took samples that exceeded the limit and ran them through various tests to see which violations would be spotted. Larger samples gave the best results: sampling only 0.1 cubic meter of water (26.4 gallons) made it difficult to detect concentrations even twice as high as the standard. By contrast, when they raised the volume to 7 cubic meters (1848 gallons), the test regularly picked up violations as low as 13 zooplankton per cubic meter. 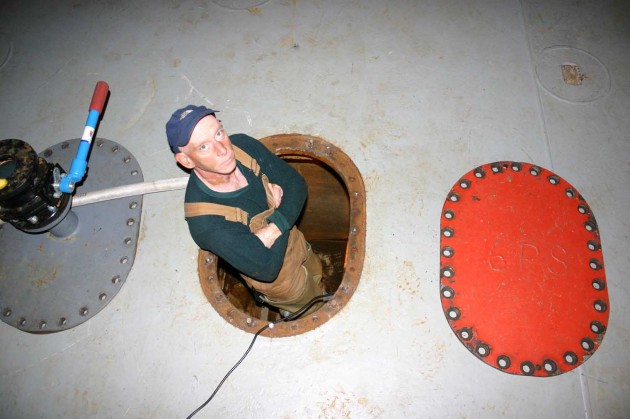 George Smith in the hold of the Cape Washington preparing its ballast tank for testing. (Photo by Tina Tennessen)

Another innovation of the model is that it can pool sample results over time and possibly across ships, making it easier to determine if treatment systems function as advertised and thus whether ships are actually compliant or not. Since analyzing samples larger than 7 cubic meters is difficult for most cargo ships, by taking multiple 7-cubic-meter samples, regulators could effectively raise the volume without overburdening the ships.

“When trying to decide how to evaluate a treatment system, we need to balance scientific rigor with what is logistically feasible,” Miller says. “Science can help inform regulatory efforts. However, in the end, it is necessary for regulators to determine the level of environmental protection that is acceptable in accordance with both scientific evidence and the needs and desires of society.”

“The findings of this study will greatly assist the Coast Guard to develop and implement effective and economical procedures for approving treatment equipment and verifying compliance by ships in meeting discharge standards to minimize the risk of introducing potentially harmful organisms to U.S. aquatic ecosystems,” says Richard Everett, an environmental scientist with the Coast Guard’s Environmental Standards Division.

The Coast Guard proposal would require most ships arriving in U.S. waters to have ballast water-treatment systems that dramatically reduce the number of living organisms in their discharge. Under the proposed regulation, most existing ships would have until 2014 or 2016 to comply, but any ships built after Jan. 1, 2012, would need to comply immediately. The agency estimated in 2009 that the new regulation could cost as much as $168 million a year, largely for ships to install the new technologies necessary to comply. However, in terms of economic and environmental damage avoided, it could save anywhere from $165 to $585 million a year.
The Coast Guard is also considering implementing a second phase of regulations, which would be up to a thousand times more stringent than the International Maritime Organization standards, perhaps beginning in 2016, but subject to an assessment of practicability.