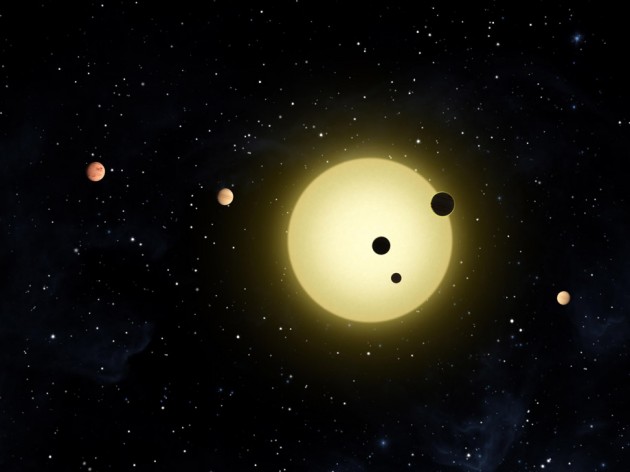 An artist’s conception of the Kepler-11 system of six planets. (Image NASA/Kepler)

About 435 stars have so far been confirmed by astronomers to have planets orbiting them. Until recently, only about 50 of these were known to host more than one planet, but the Kepler satellite, designed to search for extrasolar planets using the transit technique, has changed all of that. Last week, the Kepler team and CfA astronomers  announced the discovery of a system of six transiting planets around one Sun-like star. The previous record holder for the number of transiting planets was three.

Writing in the journal Nature, the scientists report that the new stellar system, Kepler-11, is significant is several ways. First, five of the planets are close to the star – closer than Mercury is to our sun – and the sixth is not much farther away. This is an unusual and very compact grouping whose origin is still being probed to learn about the mechanics of building planetary systems. Second, the detection shows that physical processes can indeed assemble multiple planet families. Because it is much more likely to spot a transit from Earth when planet orbits close to the star (and so subtends a bigger angle) this so-far unique result does not suggest other multiple-planet systems are rare. Other groups with larger orbits are just less likely to be discovered using transit techniques.

The third significant feature of the Kepler-11 family is the sizes of the planets. Four of them are measured to be super-Earths (between about 2-10 times the mass of the Earth), one is slighter larger, and one has a still uncertain mass. For the five whose masses have been determined, their radii are large enough that the planets are significantly less dense than the Earth, perhaps because they are composed of significant amounts of chemical ices or gaseous envelopes instead of rocky material. The new results mark the beginning of an exciting new chapter in the study of complex extrasolar planetary systems. The Kepler and CFA team include Francois Fressin, Guillermo Torres, Joshua Carter, David Charbonneau, Jean-Michel Desert, John Geary, Matt Holman, Dave Latham, Darin Ragozzine and Dimitar Sasselov.