Super-earth has an atmosphere, but is it steamy or gassy?

In December 2009, astronomers announced the discovery of a super-Earth known as GJ 1214b. At the time, they reported signs that the newfound world likely had a thick, gaseous atmosphere. Now, a team led by Jacob Bean (Harvard-Smithsonian Center for Astrophysics) has made the first measurements of GJ 1214b’s atmosphere. However, the measurements raise as many questions about the planet’s atmospheric composition as they answer.

“This is the first super-Earth known to have an atmosphere,” said Bean. “But even with these new measurements we can’t say yet what that atmosphere is made of. This world is being very shy and veiling its true nature from us.” 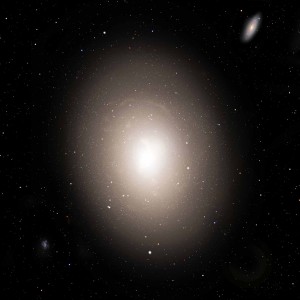 Image right: The biggest galaxies in the universe are elliptical galaxies like the one in this artist’s conception. The largest of these hold over one trillion stars according to astronomical census takers, compared to 400 billion in our Milky Way. However, new research shows that elliptical galaxies actually hold five to ten times as many stars as previously believed. (Image by David A. Aguilar)

Researchers suggested three atmospheric possibilities for GJ 1214b. The most intriguing was a thick blanket of steam vaporized by the nearby star. (This option led to the nickname “waterworld,” although it’s too hot for an ocean.) The second option was a mini-Neptune with a rocky core surrounded by ices and a hydrogen/helium atmosphere. The third model has no equivalent in our solar system – a big, rocky world with a soupy mix of gases (mainly hydrogen) recently emitted by volcanoes. 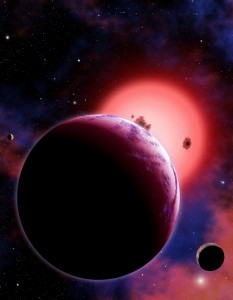 Image left: The extrasolar planet GJ 1214b, shown here in an artist’s conception with two hypothetical moons, orbits a red dwarf star 40 light-years from Earth. GJ 1214b has a radius of about 2.7 times that of the Earth and is about 6.5 times as massive, putting it squarely into the class of exoplanets known as super-Earths. Astronomers have confirmed that this alien world has a thick atmosphere, but can’t yet determine whether the atmosphere is primarily hydrogen or a steamy soup of water vapor. (Image by David A. Aguilar)

To study the planet’s atmosphere, the team observed it when it crossed in front of its star. During such transits, the star’s light filters through the atmosphere. Gases absorb the starlight at particular wavelengths, or colors, leaving behind a chemical fingerprint detectable from Earth. Similar observations have found gases like hydrogen and sodium vapor in the atmospheres of distant “hot Jupiters.”

“This is the first super-Earth to have its atmosphere analyzed. We’ve reached a real milestone on the road toward characterizing these worlds,” stated Bean.

Commenting on the work, Harvard astronomer David Charbonneau, who is not involved in the recent study but led the team that discovered GJ 1214b, agreed. “In less than 10 years, we’ve gone from studying the atmospheres of alien worlds like Jupiter, to Neptunes, to super-Earths. Earth-sized worlds are next, although they’ll be the most difficult.”

The spectrum of GJ 1214b proved to be featureless, which ruled out a cloud-free atmosphere composed primarily of hydrogen. If the atmosphere of GJ 1214b has abundant hydrogen, then it must be cloaked by a thick blanket of clouds (like Venus) or haze (like Saturn’s moon Titan). A dense, steamy atmosphere also fits the data.

“It would have to be very dense – about one-fifth water vapor by volume,” explained Bean. “Compared to our Earth, with an atmosphere that’s four-fifths nitrogen and one-fifth oxygen with only a touch of water vapor.”

The team examined GJ 1214b in the near-infrared region of the spectrum (780-1000 nanometers) using the ground-based Very Large Telescope at Paranal Observatory in Chile. Additional observations in the mid- or far-infrared might finally answer the question: Is the atmosphere of GJ 1214b steamy or gassy?

“A lot of people are putting this planet under a microscope,” said Bean. “In the next year, we should have some solid answers about what it’s truly like.”

A paper reporting these results will appear in the Dec. 2nd issue of the journal Nature. Bean’s co-authors are Eliza Miller-Ricci Kempton (University of California, Santa Cruz) and Derek Homeier (Institute for Astrophysics, Gottingen).

Waterworld enshrouded by a thick, steamy atmosphere is new class of planet