Kepler spacecraft used by Smithsonian astronomers to find other earths 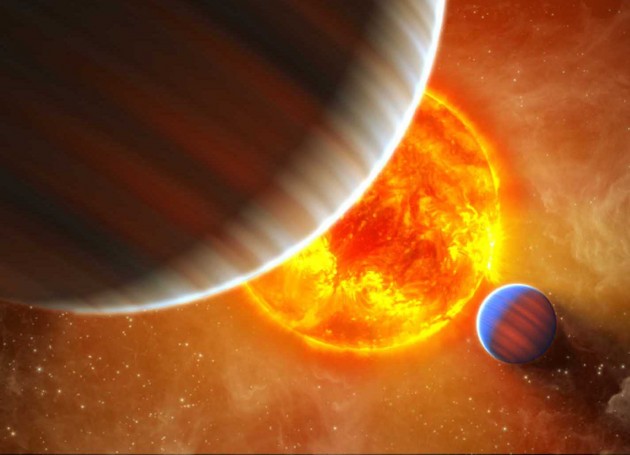 An artist’s conception of the extrasolar planetary system around the star Kepler-9. Astronomers have discovered an earth-sized planet in this system. (Photo courtesy NASA, Kepler, T. Pyle)

To date, astrophysicsts have confirmed more than 490 extrasolar planets. The vast majority are gas giants like Jupiter, but they are much stranger because many orbit close to their stars and so are much hotter than Jupiter (some are even closer to their star than Mercury is to the sun). The new data are revolutionary for astronomers trying to understand how the solar system and its planets developed, with hundreds of examples to analyze now instead of just one (our own). As search techniques are further improved and refined, scientists are on the look out for earth-like planets: those with about the same mass and size as the Earth, and located at a distance from their star where water is liquid (the so-called “habitable zone” since liquid water is essential to life as far as we know).

The Kepler spacecraft was launched in March of 2009 to study extrasolar planets. One of its major goals is the detection of terrestrial planets in habitable zones. Since launch, it has been staring at over 150,000 stars, looking for the telltale brightness dips that suggest a planet has passed across the face of the star (a transit), thereby blocking some starlight from reaching Earth. Of course there are many other effects that can temporarily dim a star’s light, sunspots for example. Moreover, modeling of the planet’s properties (mass, orbital radius) is complicated by the presence of multiple planets, and when there is one planet there are likely to be others. So far, however, the efforts at detection and modeling have been fruitful, although neither the Kepler team nor any other has reported finding an earth-like planet.

The quest for other earths is making good progress, however. Writing in the latest issue of the journal Science, a team of twelve Harvard-Smithsonian Center for Astrophysics astronomers led by Matt Holman, together with a large group of colleagues, report using Kepler to discover an earth-sized extrasolar planet. They carefully analyzed the orbital motions of two Saturn-sized extrasolar planets in the system known as Kepler-9, and found that by meticulously accounting for their motions they could subtract their effects to hunt for even smaller dips, as small as 0.02% in stellar intensity. They report finding a planet whose size is only about 1.5 earth-radii, making it one of the smallest extrasolar planets known. This planet orbits the star (its “year”) in only 1.5924 days, however, and so it is very close to its star, hot, and thoroughly unearth-like. Nevertheless it represents a major step forward in the search for small planets. Unlike other recent discoveries (like that of a planet in its habitable, “Goldilocks,” zone but considerably larger than the Earth), this new planet is small enough to raise expectations and the excitement for soon discovering extrasolar earths.