When NASA’s Solar Probe Plus launches before the end of the decade, it will carry a suite of cutting-edge scientific instruments. Only one–the Solar Wind Electrons Alphas and Protons Investigation (SWEAP)–will directly sample the sun’s outer atmosphere. Designed by scientists at the Harvard-Smithsonian Center for Astrophysics, part of SWEAP will extend beyond the probe’s heat shield to scoop up some of the Sun’s tenuous gases. 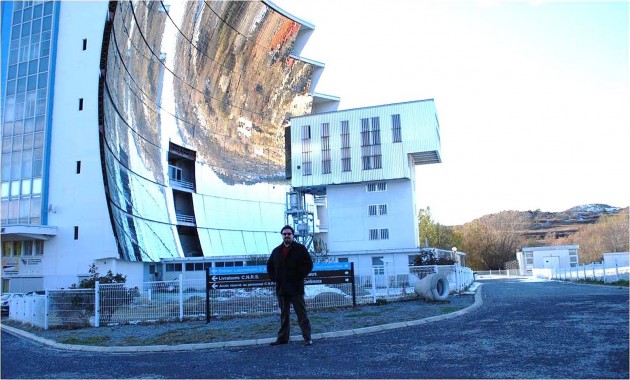 Justin Kasper, principal investigator of the SWEAP Investigation, stands in front of the solar furnace at Odeillo-Font-Romeau, France. Curved mirrors focus the sun’s heat, raising temperatures of sample materials to thousands of degrees. As the SWEAP probe swings near the Sun, it will have to withstand temperatures exceeding 2,550 degrees Fahrenheit, as well as blasts of radiation and particles. (Image courtesy Justin Kasper)

“While the other instruments are hidden, we’ll be right out there getting blasted by the Sun, literally “touching” a star for the first time,” said Justin Kasper, SWEAP principal investigator and Smithsonian astronomer.

On Sept. 2, NASA announced the funding of five Solar Probe Plus proposals. The SWEAP proposal will receive $67 million for instrument design and development.

Solar Probe Plus promises to transform our understanding of our home star and its effects on the solar system. It will get closer to the Sun than any other spacecraft, swooping to within four million miles. 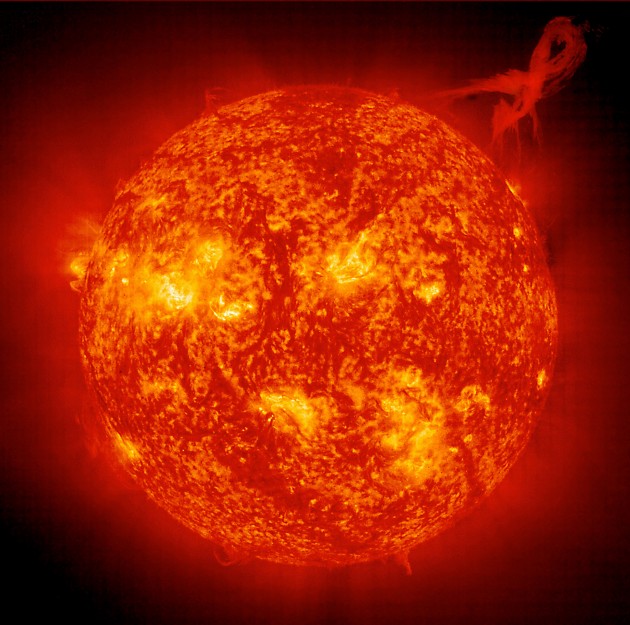 An erupting prominence on the sun. Prominences are huge clouds of relatively cool, dense plasma suspended in the Sun’s hot, thin corona. Like this large, twirling prominence, they can sometimes erupt and escape the Sun’s atmosphere. (Image courtesy SOHO (ESA and NASA); Kinetikon Pictures)

At closest approach, the Sun will appear more than 20 times wider than it does on Earth, stretching across more than 10 degrees of the sky. It will bathe the Solar Probe Plus in 500 times more light than we see on Earth. As a result, the probe will have to withstand temperatures exceeding 2,550 degrees Fahrenheit, as well as blasts of radiation and particles. A revolutionary carbon-composite heat shield will protect the spacecraft.

CfA researchers have devoted significant resources to finding materials able to not only survive a scorching, but also return useful data. That groundwork included testing materials in a furnace at temperatures up to 4,700 degrees F.

The team found two materials that could potentially be used to build SWEAP: tungsten and doped, single-crystal silicon carbide. (Silicon carbide has a wide variety of commercial uses, including drill bits and other cutting tools.)

The design and development of SWEAP represents a promising expansion of Harvard-Smithsonian Center for Astrophysics’ solar astronomy program. The Center is well known for its breadth of astronomical research, covering all regions of the spectrum from low-energy radio waves to harsh gamma rays. SWEAP will add direct sampling and measuring to the Center’s expertise.