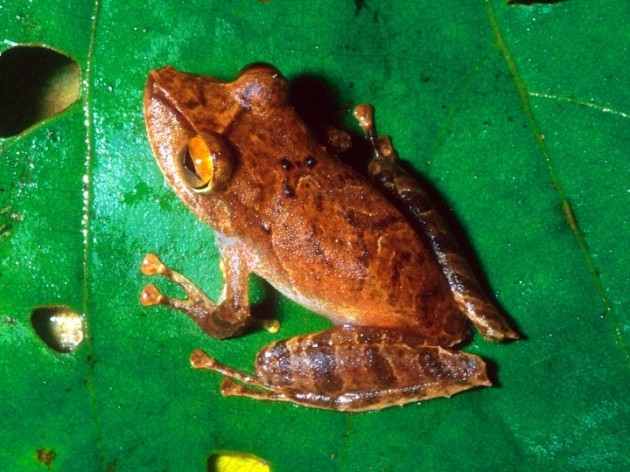 Pristimantis educatoris, collected in El Cope, in Panama’s Omar Torrijos National Park, is about 2 to 4 centimeters long and has expanded, round and even finger disks and toes.  Its eye color varies from blood red to yellow-orange above and dark purple to dark grey below.

Trying to stay ahead of a deadly disease that has wiped out more than 100 species, scientists at the Smithsonian Tropical Research Institute continue to discover new frog species in Panama. Two teams of researchers have named two new species in 2010: Pristimantis educatoris, from Omar Torrijos National Park, and Pristimantis adnus from Darien Province near the Colombian border.

In 1989 researchers realized that frogs were dying around the world. A few years later, they identified the cause: a fungal disease called chytridiomycosis. In 2004 Karen Lips, associate professor at the University of Maryland, sounded the alarm that the disease was devastating highland frogs in Central Panama and spreading across the country to the east.

“We are working as hard as we can to find and identify frogs before the disease reaches them, and to learn more about a disease that has the power to ravage an entire group of organisms,” said Roberto Ibanez, research scientist at STRI and local director of the Panama Amphibian Rescue and Conservation Project. “It is heartbreaking that these animals are going extinct before we even know what they are.” 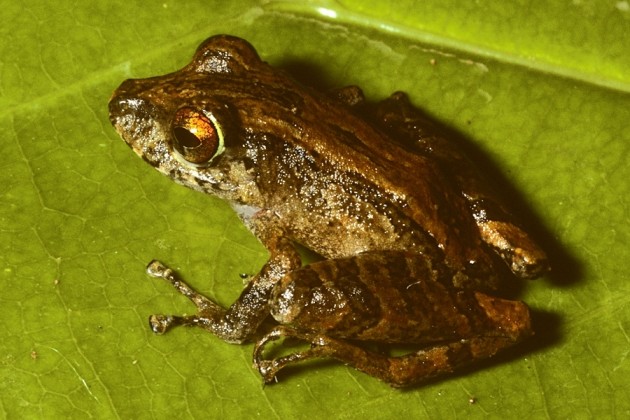 Pristimantis adnus, collected on the Pacific coast of Darien Province, Panama.  Males are about 2 centimeters long.  The skin of the back is shagreen with scattered, enlarged granules.   (Photos by Andrew Crawford)

Since 2005, research institutions and zoos from Panama and the United States have scrambled to collect healthy frogs to the east of the infected area—and save them from extinction. The Panama Amphibian Rescue and Conservation Project unites eight institutions including STRI and the Smithsonian’s National Zoological Park, along with Panama’s environmental authority, ANAM, in a new effort to raise captive frogs in Panama at Summit Nature Park with support from the already up-and-running El Valle Amphibian Conservation Center.

While collecting at Omar Torrijos National Park, Lip’s team noticed that a common frog was much bigger than specimens collected elsewhere. Her colleagues, Mason Ryan and Tom Giermakowski from the Museum of Southwestern Biology and the University of New Mexico, compared the shapes of the frogs’ feet and toes with frogs in museum collections. They concluded that the bigger frogs were actually a species new to science.

In 2008, researchers first detected the fungus to the east of the Panama Canal. During a collecting trip in November, 2009 to Chagres National Park, even further to the east, researchers were dismayed to find that most of the frogs there were already infected and dying.

On a different earlier trip in Darien Province, another new frog species was collected by researchers from STRI, the University of Panama and the Círculo Herpetológico de Panamá.

Its name is based on ADN, the acronym for the Spanish acido deoxiribonucleico, meaning deoxyribonucleic acid in English.

These two reports bring the total number of frog species described in Panama and Costa Rica to 197.  Nearly 15 percent of these new frogs have been described in the last seven years.