Distant, dying star gives astronomers preview of the fate of our Sun

Some 550 light-years from Earth, a star very much like our Sun is writhing in its death throes. Chi Cygni has swollen in size to become a red giant star so large that it would swallow every planet out to Mars in our solar system. Moreover, it has begun to pulse dramatically in and out, beating like a giant heart. New close-up photos of the surface of this distant star show its throbbing motions in unprecedented detail. “This work opens a window onto the fate of our Sun five billion years from now, when it will near the end of its life,” says astronomer Sylvestre Lacour of the Observatoire de Paris. 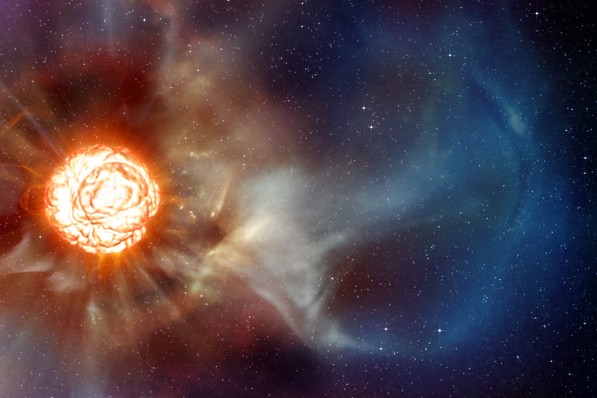 Image: Chi Cygni, a red giant star as shown in this artist’s conception, is nearing the end of its life. As it runs out of fuel, it pulses in and out, beating like a giant heart and ejecting shells of material.

As a sunlike star ages, it begins to run out of hydrogen fuel at its core. Like a car running out of gas, its “engine” begins to splutter. On Chi Cygni, we see those splutterings as a brightening and dimming, caused by the star’s contraction and expansion. As it pulses, the star is puffing off its outer layers, which in a few hundred thousand years will create a beautifully gleaming planetary nebula. Chi Cygni pulses once every 408 days. At its smallest diameter of 300 million miles, it becomes mottled with brilliant spots as massive plumes of hot plasma roil its surface. As it expands, Chi Cygni cools and dims, growing to a diameter of 480 million miles—large enough to engulf and cook our solar system out to the asteroid belt. For the first time, astronomers have photographed these dramatic changes in detail. They recently reported their work in the The Astrophysical Journal. “We have essentially created an animation of a pulsating star using real images,” stated Lacour. “Our observations show that the pulsation is not only radial, but comes with inhomogeneities, like the giant hotspot that appeared at minimum radius.” 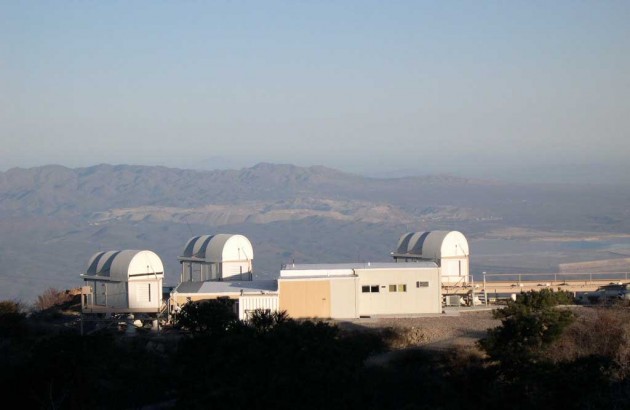 Imaging variable stars is extremely difficult, for two main reasons. The first reason is that such stars hide within a compact and dense shell of dust and molecules. To study the stellar surface within the shell, astronomers observe the stars at a specific wavelength of infrared light. Infrared allows astronomers to see through the shell of molecules and dust, like X-rays enable physicians to see bones within the human body. The second reason is that these stars are very far away, and thus appear very small. Even though they are huge compared to the Sun, the distance makes them appear no larger than a small house on the moon as seen from Earth. Traditional telescopes lack the proper resolution. Consequently, the team turned to a technique called interferometry, which involves combining the light coming from several telescopes to yield resolution equivalent to a telescope as large as the distance between them. They used the Smithsonian Astrophysical Observatory’s Infrared Optical Telescope Array, or IOTA, which was located at Whipple Observatory on Mount Hopkins, Arizona.

“IOTA offered unique capabilities,” said co-author Marc Lacasse of the Harvard-Smithsonian Center for Astrophysics. “It allowed us to see details in the images which are about 15 times smaller than can be resolved in images from the Hubble Space Telescope.” In the forthcoming decade, the prospect of ultra-sharp imaging enabled by interferometry excites astronomers. Objects that, until now, appeared point-like are progressively revealing their true nature. Stellar surfaces, black hole accretion disks, and planet forming regions surrounding newborn stars all used to be understood primarily through models. Interferometry promises to reveal their true identities and, with them, some surprises.

Five Images of our universe that will astound you