Attached to a paper base, the humble disc inscribed with dozens of numbers rests in quiet obscurity in the Mathematics Collections of the Smithsonian’s National Museum of American History. It was donated to the museum recently by George Dankers, a naval architect who used it for 30 years in the design of ships and boats. 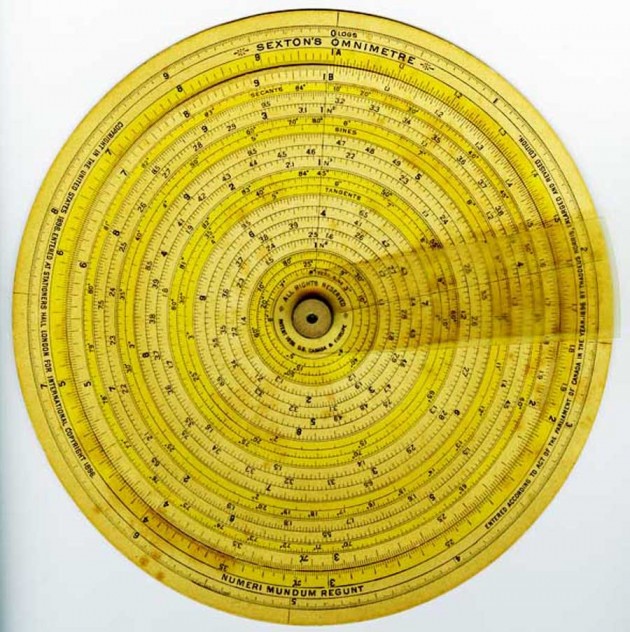 Called an omnimetre, it is the 1891 invention of Philadelphia engineer Albert Sexton who created its prototype using a piece of tracing paper and a suspender button. As its name suggests, the omnimetre was designed to carry out numerous operations of arithmetic and trigonometry, says Peggy Kidwell, curator of mathematics at the Smithsonian. “It has scales for multiplication, division and common logarithms, as well as squares, cubes, and fifth powers of numbers.” In his own words, Sexton called his circular invention a “quite useful and inexpensive slide rule.”

The omnimetre sold successfully in America for some 60 years yet was never widely popular. Still, this device and other 19th century “aids to arithmetic,” Kidwell says, helped “shape and reshape engineering and the activity of mathematicians” at a critical time in American history.

In the late 1800s, the growth of American professional engineering, new manufacturing techniques, European precedents, and the innovations of people like Sexton combined to encourage much wider use of aids to computation. Arithmetic, once considered as a purely intellectual activity, increasingly became a mechanical task. Mathematical analysis also played a larger role in business, engineering and the social sciences. Ownership of computing devices, especially slide rules, came to be seen as a symbol of technical competence.

The Smithsonian’s National Museum of American History is home to a collection of several thousand mathematical instruments that includes not only a few hundred slide rules but numerous calculating machines, drawing instruments, geometric models and teaching devices. Sexton’s slide rule is an invention that tells an important story about the rise of mathematics and engineering  in America.