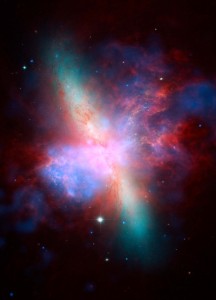 Image: This image is a composite of multi-wavelength images of the active galaxy M82 from the three Great Observatories: Hubble Space Telescope, Chandra X-Ray Observatory, and Spitzer Space Telescope.

VERITAS has found new evidence for cosmic rays in the “Cigar Galaxy,” also known as Messier 82 (M82), located 12 million light-years from Earth in the direction of the constellation Ursa Major. The VERITAS observations strongly support the long-held theory that supernovae and stellar winds from massive stars are the dominant accelerators of cosmic-ray particles. Galaxies with high levels of star formation like M82, also known as “starburst” galaxies, have large numbers of supernovae and massive stars. If the theory holds, then starburst galaxies should contain more cosmic rays than normal galaxies. The VERITAS discovery confirms that expectation, indicating that the cosmic-ray density in M82 is approximately 500 times the average density in our Galaxy, the Milky Way.

“This discovery has been predicted for almost 20 years, but until now no instrument was sensitive enough to see it,” said Wystan Benbow, an astrophysicist at the Smithsonian Astrophysical Observatory. Benbow coordinated this project for the Very Energetic Radiation Imaging Telescope Array System (VERITAS) collaboration.

Photo: The VERITAS array layout at the Whipple Observatory in Arizona.

VERITAS could not detect M82’s cosmic rays directly because they are trapped within the Cigar Galaxy. Instead, VERITAS looked for gamma rays, which can be indicate the presence of cosmic rays. Gamma rays are the most energetic form of light, far more powerful than ultraviolet light or even X-rays. When cosmic rays interact with interstellar gas and radiation within M82, they produce gamma rays, which can then escape their home galaxy and reach Earthbound detectors. Astronomers required two years of dedicated data to collect and tease out the faint signal coming from M82.

“The detection of M82 indicates that the universe is full of natural particle accelerators, and as ground-based gamma-ray observatories continue to improve, further discoveries are inevitable,” said Martin Pohl, a professor of physics at Iowa State University who helped lead the study. A next-generation VHE gamma-ray observatory, the Advanced Gamma-ray Imaging System is already under development.