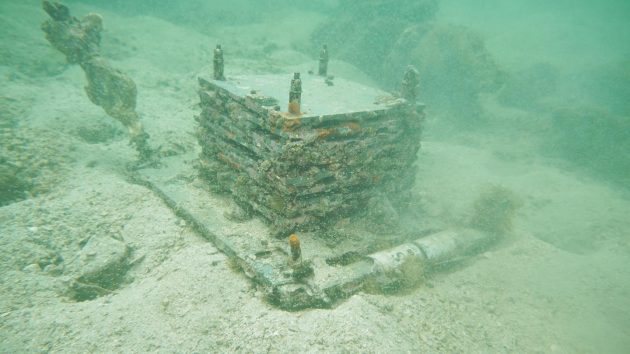 This MarineGEO settlement structure was submerged in Tung Ping Chau for two years. Many of these eight-level structures deployed in and around Hong Kong were found to have more than 300 visible organisms living in and on them. (Image courtesy The University of Hong Kong)

Some of Hong Kong’s most disturbed and pristine marine environments were the recent focus of an intense 10-day MarineGEO survey of living organisms by a team of scientists from HKU’s Swire Institute of Marine Science and School of Biological Sciences and other local and international organizations. From Hong Kong’s heavily trafficked inner Tolo Harbor to the more isolated, coral rich Tung Ping Chau, the researchers identified more than one thousand specimens of fish, crabs, snails, bivalves, worms and other animals that represented between 300 and 400 different species.

Using high-resolution photography and genetic barcoding, a number of the specimens stumped the expert taxonomists who had gathered to work on the project. This suggests that that formerly undescribed species of hermit crabs, bivalves and other animals were among the specimens collected. Several invasive species were also identified.

In addition to identifying organisms visible to the naked eye, the scientists also used genetic identification techniques to find and ID organisms too small to be seen.

The survey is part of the Smithsonian Institution’s Marine Global Earth Observatory research program (MarineGEO), a longterm research effort focusing on understanding coastal marine life and its role in maintaining resilient ecosystems around the world. In 2016, The University of Hong Kong became the first official MarineGEO site in Asia and hopes to serve as a node for future expansion of this program in the region.

One of the strengths of the MarineGEO project is the standardization of methods used to quantify biodiversity. The multilevel settlement structures, or ARMS, are approximately 5 square feet and resemble a tiny, submerged Hong Kong high-rise.

Scientists submerged 12 ARMS in waters in and around Hong Kong in May 2015 and collected them in October 2017. In addition to providing a baseline biodiversity assessment, through time, the MarineGEO project also allows scientists and governments to better evaluate human impacts on the marine environment and determine which conservation actions are most effective at preserving biodiversity.

To find out more and keep track of ongoing projects, please visit the Smithsonian website at https://marinegeo.si.edu/hong-kong-china.

MarineGEO is a legacy project which the Swire Institute of Marine Science has committed to lead for years to come, David Baker, a SWIMS principle investigator on the project, said. “Although the project is global in scale, our grassroots efforts provide a new means of monitoring Hong Kong’s changing marine environment from negative factors like climate change and development, and positive factors like improved management and restoration”

“The amount and diversity of tiny creatures in Hong Kong waters are astonishing. Even more so considering how impacted, the habitat is by the millions of people here,” said Till Roethig, a SWIMS post-doctoral fellow and program participant.

“It was exciting to connect everyone, from local students to global scientists, to the amazing diversity which makes Hong Kong a special and important site for conservation in the region,” added Shelby McIlroy, also a SWIMS post-doctoral fellow.

(Source: The University of Hong Kong)