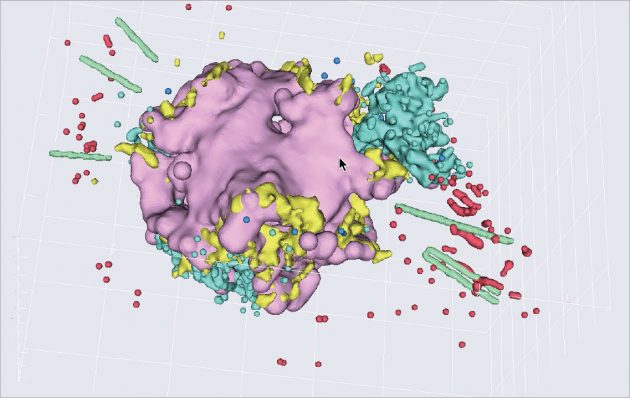 Screen shot of the VR model being built. Colors assigned include jets in green; iron in blue; neon in yellow; cooler debris in purple; outer blast wave in red.

A new project using data from NASA’s Chandra X-ray Observatory and other telescopes allows people to navigate through real data of the remains of an exploded star for the first time.

This 3D virtual reality (VR) project with augmented reality (AR) allows users to explore inside the leftovers from actual observations of the supernova remnant called Cassiopeia A. Cassiopeia A (Cas A, for short) is the debris field of a massive star that blew itself apart over 400 years ago.

The new 3D VR/AR project of Cas A is a collaboration between the Chandra X-ray Center in Cambridge, Mass., and Brown University in Providence, RI, and will provide new opportunities for public communications, informal education, and research. The Chandra X-ray Center is operated for NASA by the Smithsonian Astrophysical Observatory.

“The stars are much too far away to touch, but this project will let experts and non-experts – at least virtually – walk among the remains of one of the most famous supernova remnants in our sky,” said Kimberly Arcand, visualization lead at the Chandra X-ray Center.

VR is computer technology that simulates a user’s physical presence in a virtual environment. AR adds elements, such as text, overlays and audio, to enhance that experience with sensory input

Chandra has repeatedly observed Cas A since the telescope was launched into space in 1999. Each exposure has added new and important data to the growing bank of information that astronomers use to study this object. This deep reservoir of data has allowed astronomers and visualization specialists to take the Cas A far beyond the two-dimensional imagery that exists for most astronomical objects.

In 2009, a team of scientists, including astrophysicist Tracy Delaney (then of the Massachusetts Institute of Technology) and visualization experts used data from Chandra, NASA’s Spitzer Space Telescope, and ground-based optical facilities to generate a three-dimensional (3D) digital model of Cas A, the first ever of a supernova remnant. In 2013, a team of data specialists translated that into the first 3D print of a supernova remnant.

“As technology has advanced in the VR and AR realms in recent years, we realized that we could go further with the 3D Cas A model,” said Arcand. “Instead of us telling people where to look in Cas A, this project lets them decide for themselves.”

“The visualization of the Cas A supernova remnant took years to put together, and it deserves a magnificent way to experience it,” said Tom Sgouros of Brown’s Virtual Reality Lab. “Short of creating a building-size replica of the data, we think virtual reality is the best way to do that.” 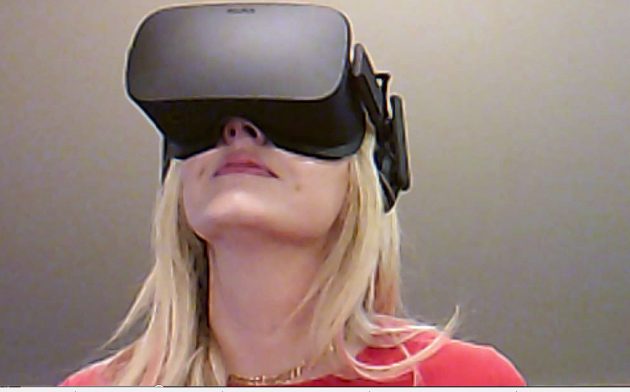 Click image for a video demo of Cassiopeia A in virtual reality.

The 3D visualization and VR/AR may also pay scientific dividends as well. It shows that there are two main components to this supernova remnant: a spherical component in the outer parts of the remnant and a flattened (disk-like) component in the inner region. The insight into the structure of Cas A gained from the 3D visualization is important for astronomers who build models of supernova explosions.

The VR project is being made available in an open access format suitable for VR caves or “Yurts,” as well as on the Oculus Rift platform. The project coordinators plan for a Google Cardboard version in future iterations. Additional data-driven 3D astronomical objects are also in the works for the Chandra VR/AR experience.

More information on Cas A in VR is available at https://chandra.si.edu. For access to non-VR versions, the Smithsonian Learning Lab has created an interactive 3D application for the 3D Cas A with related resources and activities. Visit https://s.si.edu/cas-a