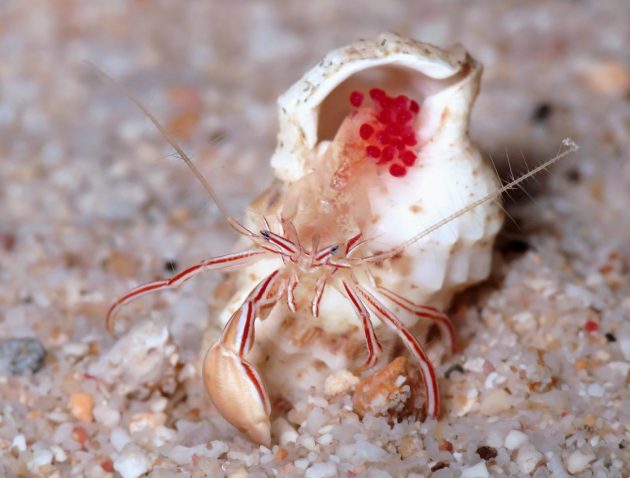 Recent underwater photographs and video from the National Marine Park of the southern Caribbean island of Bonaire has led to the discovery of a new species of small and brightly colored red-striped hermit crab. It has just been described in the open access journal ZooKeys.

Its color pattern reminded journal author Rafael Lemaitre of the Smithsonian’s National Museum of Natural History of a candy cane, so he gave it it common name “candy striped hermit crab.” Its scientific name is Pylopaguropsis mollymullerae after Molly Muller, the young granddaughter of Ellen Muller, the underwater photographer who first filmed the colorful crustacean.

Muller first photographed the unusual hermit crab alongside a “flaming reef lobster,” while observing invertebrates in crevices under a large coral ledge. Subsequently, more hermit crabs were photographed in various crevices shared with broad banded moray, spotted moray and green moray eels. After permits were obtained from the Government of the Island Territory of Bonaire, a few specimens were collected and brought to Lemaitre for study. He prepared a formal description of the new animal for publication and the specimens were deposited in the collections of the National Museum of Natural History, as required by scientific rules when naming new species. 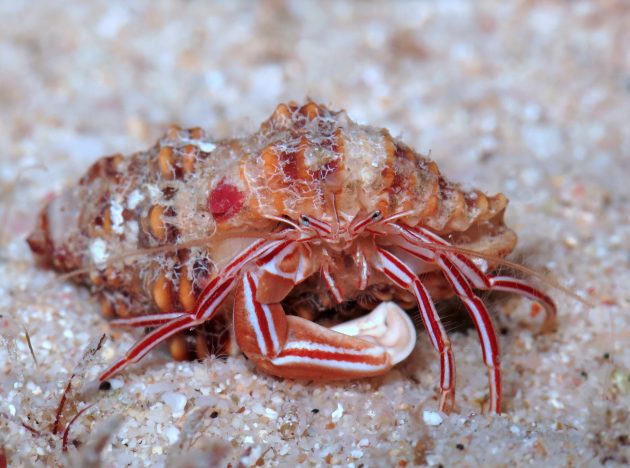 The shape of the right, or major, pincer of this new hermit crab is remarkable and unique with its shape and massive size when compared to its body. The underside of the claw of this pincer is deeply excavated, scoop-like. The function of the pincer and claw, however, is  unknown, although a video shows that it is used by the hermit crab to push itself while crawling along the ocean bottom.

Its behavior is also intriguing. Is there an ecological association of this new species with moray eels? Could this new crab function as a “cleaner” or a “den commensal” with the eels? In one instance an individual was observed crawling on a “broad banded moray,” perhaps feeding on mucus or materials on its body. These observations could be interpreted as evidence of some kind of symbiotic association, or den commensalism, between the two animals. The brightly colored pattern of the hermit crab with red stripes and very long, hairy antennae are also typical for crustaceans considered fish “cleaners.” 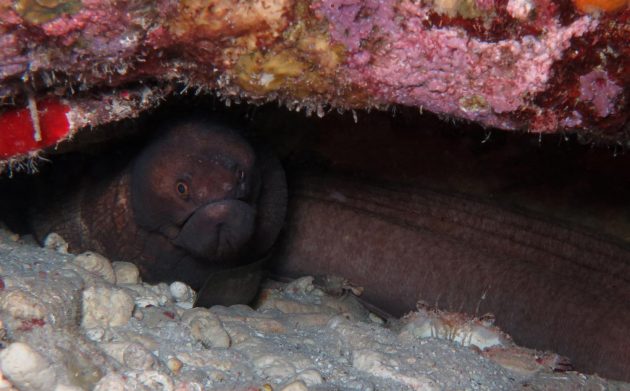 “Cleaning” parasites or fouling organisms from the body of many cooperating fish, or removal of undesired food particles by certain small and colorful shrimps has been known for nearly 60 years, but never has a hermit crab been documented to engage in such type of ecological association. Further studies are needed in order to confirm the true ecological role of this fascinating hermit crab.