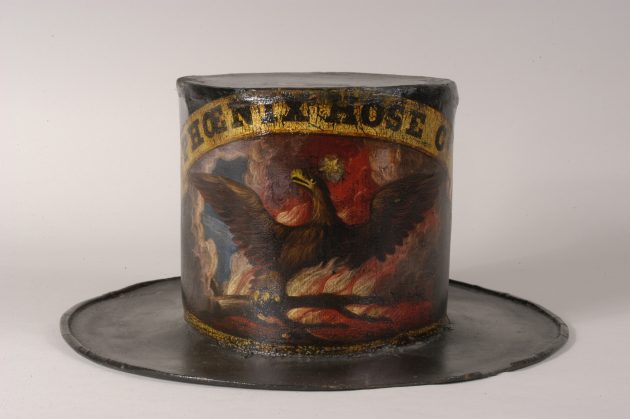 From the early 1800s, some volunteers created specialized companies that maintained and transported fire hose. Philadelphia hose companies, like the Phoenix, adopted decorated hats and capes as part of their uniform. (All images courtesy National Museum of American History)

With some 3,000 remarkable artifacts from America’s colorful 19th-century firefighting history to choose from, yet only 10 feet of exhibition space to fill, curator Tim Winkle of the Smithsonian’s National Museum of American History certainly had some tough decisions to make.

After the museum received a 4,000-object donation of firefighting artifacts from the insurance company Cigna in 2005, a dedicated exhibit on American firefighting had always been in the cards. So when the museum announced its 2016 theme would be “America Participates,” examining the various ways in which Americans have joined together to accomplish shared goals, Winkle deemed the time ripe to look at how people have participated in firefighting efforts in America.

Intended to debut in time for Fire Prevention Week in October, the exhibition, “Always Ready: Fighting Fire in the 19th Century,” shows the evolution of firefighting from an all-hands call to action to a more exclusive, formalized system. It opened Sept. 16. 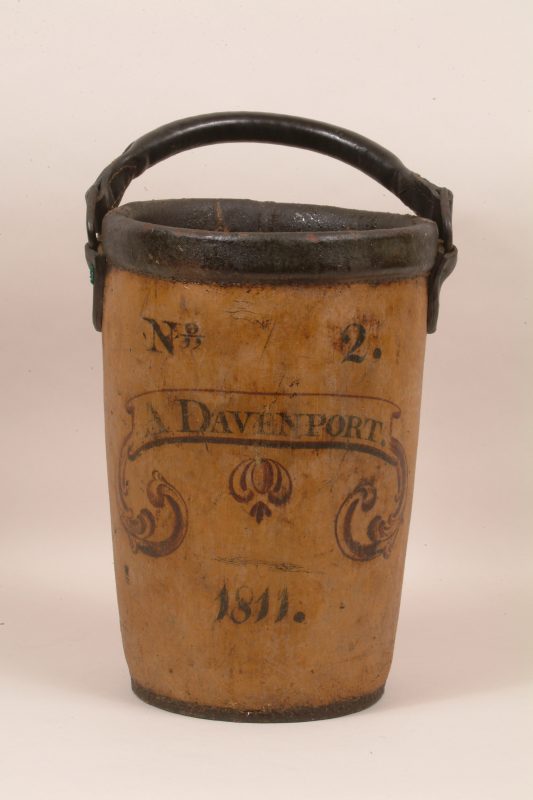 Property owners were often legally required to keep good leather buckets on hand for use by the community in the event of a fire. Citizens personalized their buckets to ensure their return.

“Firefighting is all about participation,” says Winkle; he spent more than five years helping to trim the initial Cigna gift down to the nearly 2,300 objects that would join American History’s permanent collection. For each of the three time periods represented in the exhibit—1800, 1835 and 1870—Winkle chose artifacts that ask the viewer to consider their role at a fire and what implements they might have been using at each of those times.

“Through the 1800s, the purpose of firefighting becomes more about rescue than salvage,” Winkle said. “Changes in technologies like hose and eventually steam try to keep up with the growth in cities and rises in population. By 1870, nearly every city has shifted from volunteer companies to paid departments. If it hadn’t been for the Civil War, that shift might have happened even earlier.”

By 1835, organized volunteer fire companies had almost completely replaced the bucket brigade, thanks to the invention of water-pumping engines and municipal water supplies. Fire hose, invented in 1807, superseded the trusty personalized leather buckets many citizens owned at the turn of the century. Other tools also reflect the priorities of past years and how they’ve shifted. 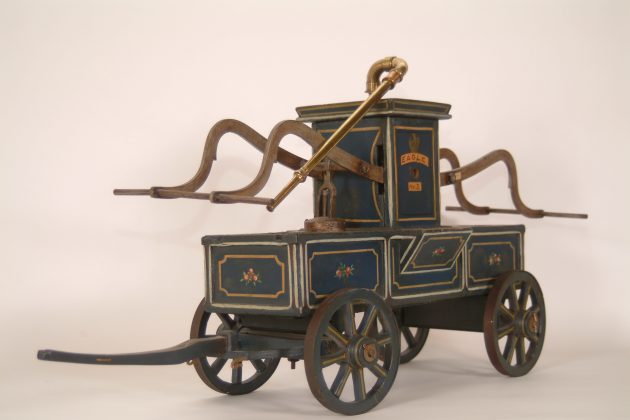 Fire Engine Model, Eagle No. 3, 1800s. Developed in late-18th-century Philadelphia, this style of engine was filled at the sides with buckets. Teams of firefighters took turns pumping while others directed water through the long nozzle above.

At the beginning of the 1800s, if fire struck and the house looked to be a loss, the next priority would be to save the occupants’ moveable wealth. Of all the household objects, the most valuable and expensive thing among them? The bed. More than likely made of solid, hand-carved and joined wood, beds would be slow to burn, but difficult to replace. Firefighters used a forged metal tool, the bed key, to quickly disassemble the pieces of the bed to cart them out of the house.

In 1835, exclusive apparel for firefighters emerged. Before today’s iconic fire helmet, painted top hats, like one from around 1860 belonging to a member of Philadelphia’s Phoenix Hose Company, were widely adopted by firefighters, in large part to signify their membership with an organized fire company and distinguish themselves from the general public. The hats weren’t just for pomp and parading—firefighters wore them on the fire ground.

“Companies want to start establishing standards and identification for what company you’re in,” Winkle said. Though the hats were little more than painted felt toppers, the oilcloth capes would have kept water off their backs during a fire, and the stylized belts and buckles would have provided quick visual identification for other firefighters present at a scene. “It’s about identity, trying to distinguish who belongs to what company, and who is a firefighter or a civilian, and trying to standardize that,” he added. 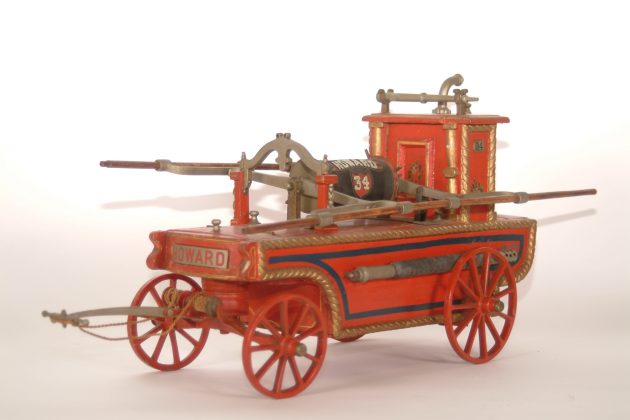 Fire Engine Model, Howard Company No. 34, 1800s. Popular with New York volunteers, this style of engine could move easily through crowded streets. Its hose was stored on the engine, allowing firefighters to more easily draw in water to discharge on flames

Some hats did provide another useful service: as decoder maps for where a fire was occurring. Before radios and electronic alarms, fires were often announced by the ringing of bells, and some cities adopted bell-ringing patterns that indicated the general direction of the fire. One hat in the museum’s collection, though not included in this exhibit, has the code painted on its top for quick reference.

Late in the 19th century, objects began to appear that still allowed common citizens, once central figures now relegated to the role of observer, to participate in the glorification of the ideals of the selfless act of fighting fire.

“For these people to do it voluntarily for very little gain, the community certainly begins to see fire companies as the epitome of selfless heroism,” Winkle says. Household objects, like an iron trivet that depicts the helmet, shield and crossed trumpets that are still associated with the fire service today, connected civilians with the romance of firefighting. 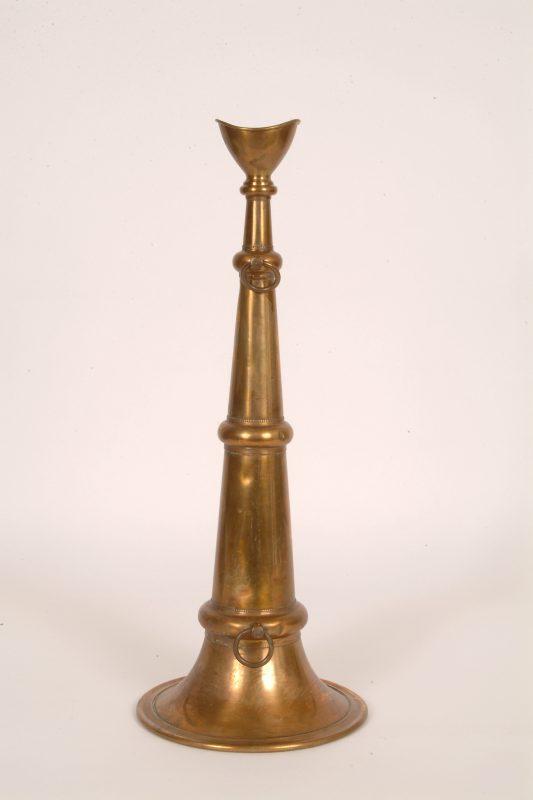 Around 1835 officers used metal speaking trumpets to direct their company’s efforts over the noise of a fire scene. Companies often awarded elaborate silver versions as trophies or commemorative tokens.

“You can slice this up in a lot of different ways, but the way we look at firefighting is as a community activity, as well as being part of the community,” Winkle said.

Carol Smith, curator at the Fireman’s Hall Museum in Philadelphia and also a recipient of some of the objects from the Cigna donation, observed that the “Always Ready” exhibit captures many of the myriad ways in which the community has always been connected to and involved in protecting their own from fire.

“Volunteer companies were the heart of their neighborhoods and had many loyal supporters,” Smith said. The trivet, in particular, demonstrates that community backing, and the buckets are a vivid reminder of how far technology to fight fires has come.

“People often talk wistfully of life in simpler times, but when you look at the tools available to fight fire in the past, we can all be grateful we live in an era with good water departments and motorized apparatus,” Smith added. “But what hasn’t changed is the heroism of the men and women who continue to fight fires to protect their communities and their fellow citizens.”