No divers were in danger when two large squid (species Taningia danae) began acting aggressively toward a robot submersible operated deep in the Pacific from NOAA’s ship Okeanos Explorer near Hawaii in September. One squid grabbed onto the sub and wouldn’t let go. The animals were recorded on video (above).

The National Oceanic and Atmospheric Administration submersible is operated remotely from the ship at the ocean’s surface and live video is broadcast ashore so many scientists can participate in the expedition. The public can also watch in real-time on the internet. NOAA squid expert Michael Vecchione, who is based at the Smithsonian’s National Museum of Natural History, was participating in the dive from his office when the squid appeared.

Smithsonian Science News asked Vecchione a few questions about these rarely seen cephlapods. (Note: According to Vecchione the two squid are misidentified in the video’s opening as “whiplash squid,” the common name of an entirely different squid family, the Mastigoteuthidae.)

Q: Why were the two T. danae acting aggressively toward the sub?

Vecchione: They were probably attracted to the sub’s lights. There is a hypothesis about bioluminescence in the deep sea we call the “burglar alarm” that goes like this: If a predator is trying to eat a jellyfish, the jellyfish lights up to try to attract a bigger predator to eat the predator that’s targeting it.

So when a big active squid like Taningia sees something light up it moves toward the light to see if there is something worth eating there. They have very large eyes, presumably to detect this bioluminescence. They live at depths of 780 to 2,950 feet where it is very dark and we believe they might also be able to detect prey chemically or by vibrations in the water.

Q: Do these squid bioluminesce?

Vecchione: Yes. One thing that is really noteworthy is if you watch that video you can see two lights flashing at the tips of two of the squids’ arms. T. danae has the largest photophores—light producing organs—of any animal that we know of. They are so bright that you can see them even though the lights of the sub are turned on which is really unusual.

When disturbed, Taningia has been observed to repeatedly flash its arm-tip photophores. Flash duration was generally only a fraction of a second; however on some occasions the arm tip glowed for periods of about one to seven seconds. We think they probably use them to startle other things: either startle predators that are trying to eat them or startle prey so that the prey will freeze and be caught.

Taningia also has smaller photophores, not visible in the video, that probably help them hide from visual predators. 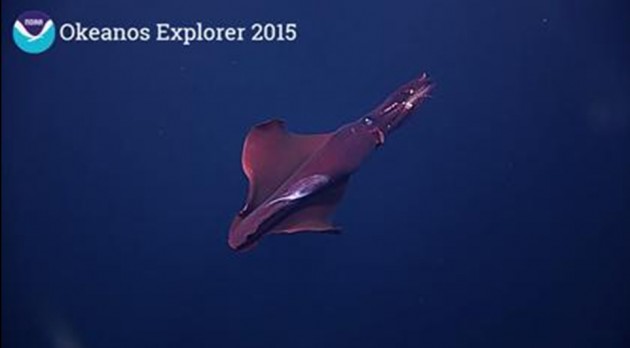 During the descent on Dive 06, a 1-2 meter squid attached itself to the back of ROV Deep Discoverer and hung out there for several minutes before coming around to the front of the vehicle, allow us to get some great imagery of it. (Image courtesy NOAA)

Q: How large are the squid in the video?

Vecchione: Several feet long. Taningia danae grows to over six feet. It is a known, and probably important, component of the sperm whale diet. True giant squid grow much larger than this species.

As you can see in the video these squid swim using their large fins. Large amplitude waves in the fins passing from head to tail propelled the squid forward. Reverse waves propel it backwards. They also can squirt water through a tube under the head to jet rapidly forward or backwards.