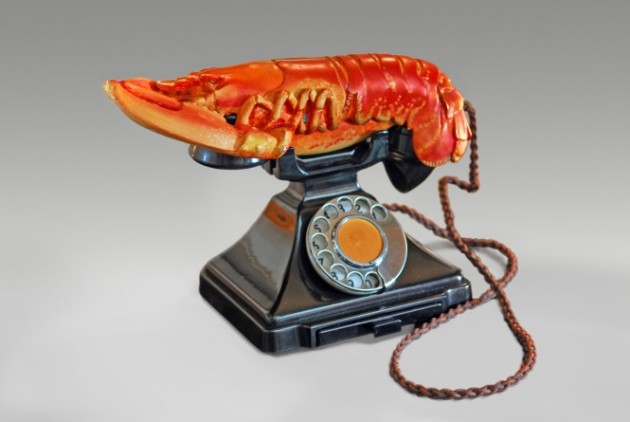 When Salvador Dalí first exhibited “Lobster Telephone” at the Galerie des Beaux-Arts in Paris in 1938, he replaced the handset of a desk telephone with an actual crustacean. Over the five-and-a-half-week run of the “International Exhibition of Surrealism,” the creature would decay, and its odor would turn viewers’ desire to disgust.

After the exhibition ended, Dalí’s British patron, Edward James, had an edition of the work made in which, for obvious practical reasons, the real lobster was replaced with a painted plaster facsimile that enveloped the handset. The artist would later write, “I do not understand why, when I ask for a grilled lobster in a restaurant, I am never served a cooked telephone. I do not understand why champagne is always chilled, and why, on the other hand, telephones, which are habitually so frightfully warm and disagreeably sticky to the touch, are not also put in silver buckets with crushed ice around them.”

An unscented version of “Lobster Telephone” will be seen Oct. 29–Feb. 15, 2016, in the Hirshhorn Museum and Sculpture Garden’s “Marvelous Objects: Surrealist Sculpture from Paris to New York,” the first major museum exhibition devoted to a comprehensive view of the movement’s three-dimensional works.