Five critically endangered Cuban crocodiles hatched at the National Zoo’s Reptile Discovery Center between July 29 and Aug. 7. The eggs were laid by Dorothy, a 57-year-old genetically valuable crocodile. The hatchlings are less than a foot long, but they could reach up to 10.5 feet long when fully grown.

Dorothy laid a clutch of 24 eggs in a hole nest May 12. Crocodiles build either mound or hole nests. Hole nests are not always easily visible after females dig them; however, keepers had been monitoring Dorothy carefully and noticed physical changes indicating she had recently laid eggs. After a week of searching the exhibit for her nest, they found it and excavated the eggs. Ten of the eggs were fertile and moved to an incubator. Half of those fertile eggs continued to develop during the entire gestation period. 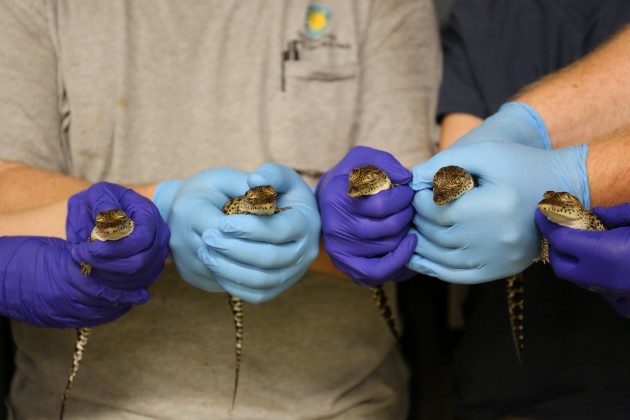 Keepers incubated the eggs in the temperature range to hatch out males, but it is too early to definitively determine the sex of each crocodile.

The Species Survival Plan (SSP) for Cuban crocodiles requested that the Zoo hatch all males to ensure that the Cuban crocodile population in human care continues to be sustainable. In the wild, a Cuban crocodile’s nest will range in temperature. Depending on an egg’s temperature in the nest, some eggs could incubate at much warmer temperatures than others, resulting in males and females hatching out of the same clutch.

The baby crocodiles are behind the scenes at the Reptile Discovery Center being cared for by keepers. Guests can see adult Cuban crocodiles Dorothy, Blanche, Rose and Jefe on exhibit as usual.

Cuban crocodiles are listed as critically endangered on the International Union for Conservation of Nature. They are threatened with habitat loss, hybridization and illegal hunting. They are only found in two swamps in Cuba.

With the recent hatching of two Cuban crocodiles, the National Zoo just got a little snappier!