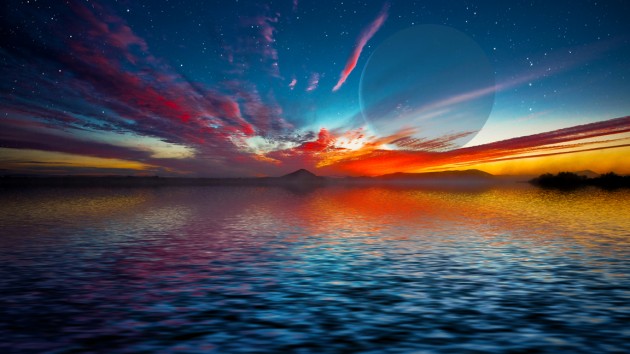 This artist’s depiction shows a gas giant planet rising over the horizon of an alien waterworld. New research shows that oceans on super-Earths, once established, can last for billions of years. (Image by David A. Aguilar)

For life as we know it to develop on other planets, those planets would need liquid water, or oceans. Geologic evidence suggests that Earth’s oceans have existed for nearly the entire history of our world. But would that be true of other planets, particularly super-Earths? New research suggests the answer is yes and that oceans on super-Earths, once established, can last for billions of years.

“When people consider whether a planet is in the habitable zone, they think about its distance from the star and its temperature. However, they should also think about oceans, and look at super-Earths to find a good sailing or surfing destination,” says lead author Laura Schaefer of the Harvard-Smithsonian Center for Astrophysics (CfA).

Schaefer presented her findings today in a press conference at a meeting of the American Astronomical Society.

Even though water covers 70 percent of Earth’s surface, it makes up a very small fraction of the planet’s overall bulk. Earth is mostly rock and iron; only about a tenth of a percent is water.

However, Earth’s water isn’t just on the surface. Studies have shown that Earth’s mantle holds several oceans’ worth of water that was dragged underground by plate tectonics and subduction of the ocean seafloor. Earth’s oceans would disappear due to this process, if it weren’t for water returning to the surface via volcanism (mainly at mid-ocean ridges). Earth maintains its oceans through this planet-wide recycling.

Schaefer used computer simulations to see if this recycling process would take place on super-Earths, which are planets up to five times the mass, or 1.5 times the size, of Earth. She also examined the question of how long it would take oceans to form after the planet cooled enough for its crust to solidify.

She found that planets two to four times the mass of Earth are even better at establishing and maintaining oceans than our Earth. The oceans of super-Earths would persist for at least 10 billion years (unless boiled away by an evolving red giant star).

Interestingly, the largest planet that was studied, five times the mass of Earth, took a while to get going. Its oceans didn’t develop for about a billion years, due to a thicker crust and lithosphere that delayed the start of volcanic outgassing.

“This suggests that if you want to look for life, you should look at older super-Earths,” Schaefer says.

This also suggests that, assuming evolution takes place at a similar rate to Earth’s, you want to search for complex life on planets that are about five and a half billion years old, a billion years older than Earth.

Venus-like Exoplanet Might Have Oxygen Atmosphere, But Not Life