The moon passed between the Earth and the sun on Thursday, Oct. 23. While avid stargazers in North America looked up to watch the spectacle, the best vantage point was several hundred kilometers above the North Pole.

Astrophysicist Patrick McCauley from the Smithsonian’s Astrophysical Observatory explains how the Hinode satellite, which has a polar orbit, was in the perfect position to record a very different view of the solar eclipse.

Q: What does the footage from the satellite show?

McCauley: We are looking at an annular eclipse that was observed by an X-ray telescope on the Hinode satellite. An annular eclipse occurs when the moon passes directly between the observer and the sun. In this type of eclipse the moon’s shadow is not quite large enough to cover the full disc of the sun, resulting in a visible ring.

The x-ray telescope on the Hinode satellite is used to monitor the outer atmosphere of the sun, called the corona. The sun’s outer atmosphere is much hotter than its surface. The surface is about 5000 Kelvin and the corona can get up to 10 million Kelvin. That is hot enough to produce X-rays, which is what we are seeing with this telescope.

Q: Why couldn’t we see an annular eclipse from North America?

McCauley: We could only see a partial eclipse because the Moon did not pass directly in front of the sun from our perspective on the ground. Instead, the center of the moon’s shadow was cast above Earth’s north pole, which allowed it to be viewed as an annular from Hinode’s perspective in orbit.

Q: What can scientists learn by recording this solar eclipse?

McCauley: The eclipse observation allows us to better calibrate the instruments aboard Hinode. When the moon passes in front of the sun the detector on the X-ray telescope should go completely dark – you shouldn’t be able to see anything where the moon is. In fact, you do see a little bit of light and that is because of scattered light within the telescope. The eclipse observations allow us to better understand this scattered light and improve calibrations of the instrument. 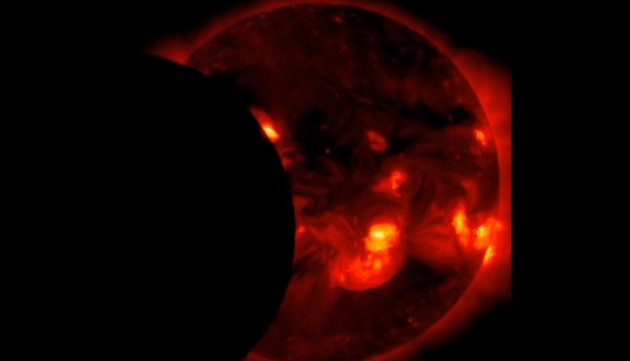 Q: What other things do you study with the X-ray telescope?

McCauley: We are very interested in studying solar flares. Flares are most dramatic in X-rays and we’re using the X-ray telescope to better understand the physical mechanisms that drive flares so that they might someday be forecasted. We’re also interested in understanding why the corona is so much hotter than the Sun’s surface. Read more on how tiny nanoflares might heat the Sun’s corona.

Hinode is a Japanese mission developed and launched by the Institute of Space and Astronautical Science (ISAS) /Japan Aerospace Exploration Agency (JAXA), with the National Astronomical Observatory of Japan (NAOJ) as a domestic partner. NASA and the Science & Technology Facilities Council are Hinode international partners. It is operated by these agencies in cooperation with the European Space Agency (ESA) and the Norwegian Space Center (NSC).

Enrich your solar eclipse experience with this new app!