Is Pluto a planet? The votes are in 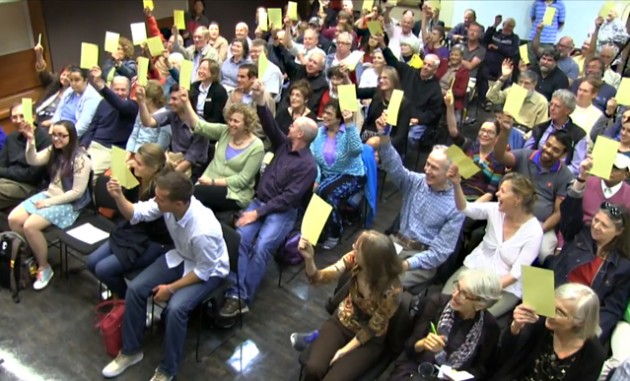 On Sept. 18, 2014, audience members who attended the Observatory Night talk “What is a Planet?” voted to choose one of three possible definitions for a planet. The result: a planet is “the smallest spherical lump of matter than formed around stars or stellar remnants,” and Pluto IS a planet! (Photo: Harvard-Smithsonian CfA)

What is a planet? For generations of kids the answer was easy. A big ball of rock or gas that orbited our Sun, and there were nine of them in our solar system. But then astronomers started finding more Pluto-sized objects orbiting beyond Neptune. Then they found Jupiter-sized objects circling distant stars, first by the handful and then by the hundreds. Suddenly the answer wasn’t so easy. Were all these newfound things planets?

Since the International Astronomical Union (IAU) is in charge of naming these newly discovered worlds, they tackled the question at their 2006 meeting. They tried to come up with a definition of a planet that everyone could agree on. But the astronomers couldn’t agree. In the end, they voted and picked a definition that they thought would work. 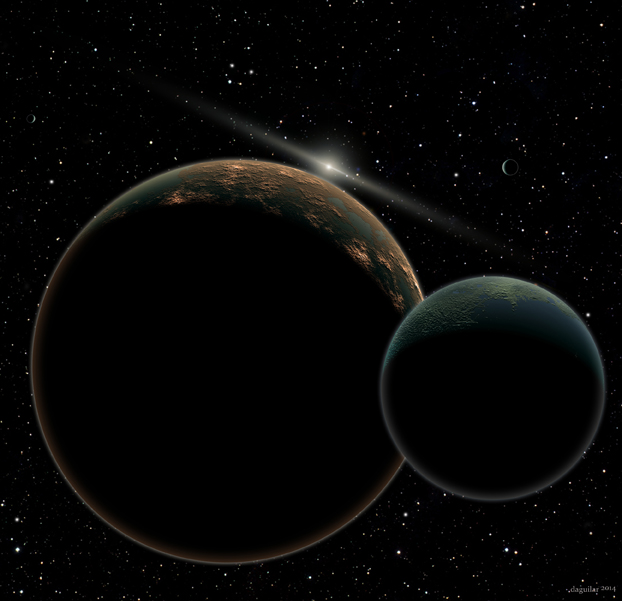 Pluto (left) and Charon (right) dominate this view of the outer solar system. Charon is about half the size of Pluto. Pluto also hosts four tiny moons – Nix, Hydra, Kerberos, and Styx – two of which are seen as small crescents at top left and right. In the distance, a faint Sun illuminates dust within the asteroid belt. (Photoo David A. Aguilar, CfA)

The current, official definition says that a planet is a celestial body that:
1. is in orbit around the Sun,
2. is round or nearly round, and
3. has “cleared the neighborhood” around its orbit.

But this definition baffled the public and classrooms around the country. For one thing, it only applied to planets in our solar system. What about all those exoplanets orbiting other stars? Are they planets? And Pluto was booted from the planet club and called a dwarf planet. Is a dwarf planet a small planet? Not according to the IAU. Even though a dwarf fruit tree is still a small fruit tree, and a dwarf hamster is still a small hamster.

Eight years later, the Harvard-Smithsonian Center for Astrophysics decided to revisit the question of “what is a planet?” On September 18th, we hosted a debate among three leading experts in planetary science, each of whom presented their case as to what a planet is or isn’t. The goal: to find a definition that the eager public audience could agree on!

After these experts made their best case, the audience got to vote on what a planet is or isn’t and whether Pluto is in or out. The results are in, with no hanging chads in sight.

According to the audience, Sasselov’s definition won the day, and Pluto IS a planet.