The National Zoo’s Great Cats team celebrated the arrival of its first litter of African lion cubs in four years. On Jan. 24, the Zoo’s 10-year-old lion Nababiep gave birth to three cubs—two surviving—in an eight-hour period. These cubs are the third litter for Nababiep and the fourth for the 8-year-old father, Luke. 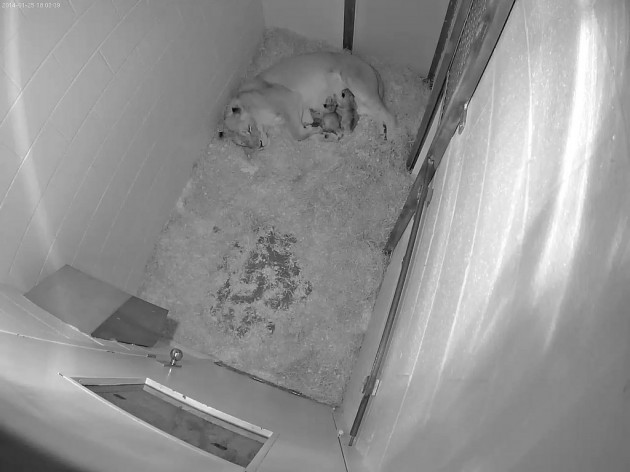 “The first few days of a lion cub’s life are very fragile,” said Rebecca Stites, an animal keeper at the Great Cats exhibit. “Naba continues to prove that she has great maternal instincts, so the best course of action is for us to allow her to care for and bond with her cubs. We have every indication that she will successfully raise these cubs just as she did her previous litter.” (Note: Nababiep gave birth to one cub in May 2010 that lived for 48 hours.)

The mortality rate for lion cubs (including those that are younger than a year) in captivity in 2009 was about 30 percent, compared to a 67 percent mortality rate for cubs in the wild. Animal care staff are cautiously optimistic that the cubs will thrive and are giving Nababiep the solitude she needs to care for her young.

The Zoo received a recommendation to breed the lions from the Association of Zoos and Aquariums’ Species Survival Plan for African lions. An SSP matches individual animals across the country for breeding in order to maintain a healthy, genetically diverse and self-sustaining population. About one month after Luke bred with Nababiep, he and Nababiep’s 9-year-old sister Shera also bred. Animal care staff are closely monitoring Shera and suspect she is pregnant based on her physical changes and weight gain, among other cues. Keepers gradually separated Nababiep from Luke and Shera to give Nababiep the privacy she needs to emulate the natural process. As Shera’s expected delivery date draws near, animal care staff will separate her from Luke as well. In the wild, female lions will typically leave the pride for a secure area and give birth alone. A lioness may wait up to six weeks before introducing her cubs to the rest of the pride.

The formation of prides makes lions unique among the great cats, many of which are solitary animals. Hunting, disease and habitat loss have contributed to a decline in the population of African lions, which are considered a vulnerable species by the International Union for Conservation of Nature.

“One of the best parts of this job is seeing all of our planning and preparation come to fruition,” said Kristen Clark, an animal keeper at the Great Cats exhibit. “In 2010, we had a remarkable opportunity to watch seven cubs grow, master husbandry training and go on to other zoos to contribute to their breeding programs. To watch this litter follow in their siblings’ footsteps will be incredibly exciting and rewarding.”

Nababiep’s cubs will not be on exhibit until late spring, which will give the Zoo’s animal keepers and veterinary team time to examine them. However, National Zoo visitors can see 5-month-old Sumatran tiger cubs Bandar and Sukacita on exhibit every day that weather permits staff to give them outdoor access.