Hidden in the thick foliage of tropical forests a subfamily of colorful beetles–the Chrysomelidae–may be hiding the secrets to the earliest stages of social behavior. Remarkably these beetles show explicit signs of maternal instincts and care.

While guarding her larvae, mothers of one species of these beetles reacted aggressively by charging to the edge of a leaf when a thin stick was introduced to the area by an observer. Charges, stamping and shaking continued for a short period of time after the stimulus was removed. A strong reaction was also directed toward  a camera held closely under and to the side of the natal leaf. 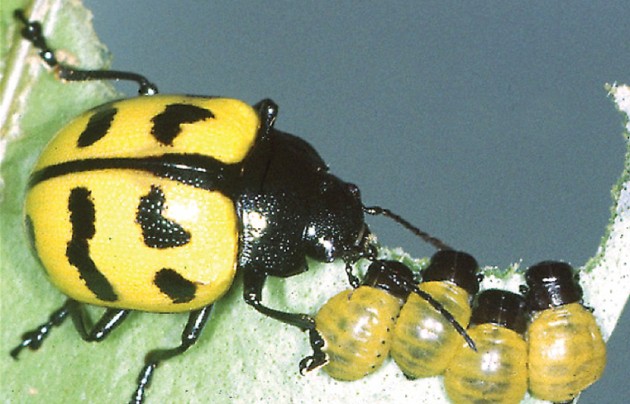 In a new paper in the journal Zookeys an international team of scientists from the Smithsonian Tropical Research Institute, Centro Universitário de Lavras, Staatliches Museum für Naturkunde Karlsruhe, and Université libre de Bruxelles looked into the complex subsocial behaviors present in the extraordinary Chrysomelinae subfamily to discover and describe in detail the different degrees of maternal instincts present within 8 species. The exciting insight into the biology of these species was published in “Research on Chrysomelidae” a special Special Zookeys issue, along with 6 other articles on the family.

Within the leaf beetles, maternal care of offspring is found in just two of 15 subfamilies, the broad-shouldered leaf beetles (Chrysomelinae) and the tortoise beetles (Cassidinae), groups possibly more vulnerable to predators and parasitoids due to slow-moving and exposed immature stages. The study of subsocial behavior, additional to its intrinsic appeal, may offer a perspective on selective forces at work during the earliest stages of insect social evolution. 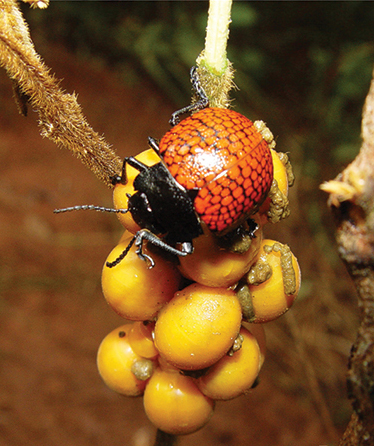 “Doryphora reticulata” female tending fully-developed larvae at the base of the food plant just prior to pupating underground (photo by Fernando Frieiro-Costa).

Complex subsocial behavior was observed in pairs of one of the species studied, D. paykulli, interacting aggressively on newly expanded leaves. Whether these were contests over resources or precopulatory courtship is unclear, however, analysis of video taken of one of these interactions shows the use of the mesosternal horn in dislodging a competitor. Adult females were discovered during mid-May in close proximity to eggs attached to the cupped apical leaves.

Observations of additional species associated with a different family of plants, the Solananceae, suggest that mothers modify leaf resources in advance of bearing live offspring, and later block and herd movement of larvae among leaves on the same food plant. An adult was also recorded following a tightly arranged group of larvae moving between leaves on their food plant. Mothers at times tightly straddled their aggregated first and second instar larvae on the natal leaf, preventing their advance down the leaf petiole.

Observations and field studies find evidence that mothers actively defend offspring in at least eight species and three genera of Neotropical Chrysomelinae tightly associated with two host plant families. Reports on the three Doryphora species that feed on vines in the dogbane family, Apocyanaceae, reveal that mothers defend eggs and larvae by straddling, blocking access at the petiole and greeting potential predators with leaf-shaking and jerky advances. A less aggressive form of maternal care is found in two Platyphora and four Proseicela species associated with shrubs and small trees in the nightshade family Solanaceae. 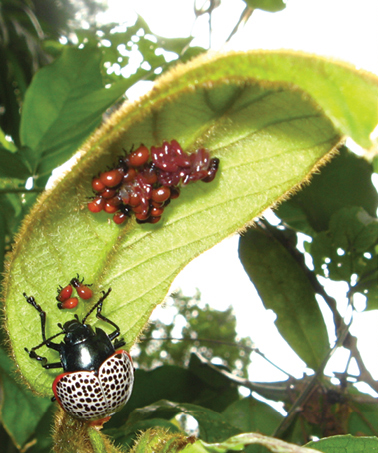 “Large voids remain in our understanding of the natural history of both groups, including the identity and importance of predators and parasitoids and the diverse ways in which mothers may be influencing the survival of offspring,” Donald Windsor, of the Smithsonain Tropical Research Institute in Panama, explains. “We urge continued study of these magnificent insects, their enemies and their defenses, both behavioral and chemical, especially in forests along the eastern versant of the Central and South American cordillera.” –Source: Pensoft Publishers