Observed in the wild, tucked away in museum collections, and even exhibited in zoos around the world―there is one mysterious creature that has been a victim of mistaken identity for more than 100 years. A team of Smithsonian scientists, however, uncovered overlooked museum specimens of this remarkable animal, which took them on a journey from museum cabinets in Chicago to cloud forests in South America to genetics labs in Washington, D.C. The result: the olinguito (Bassaricyon neblina)―the first carnivore species to be discovered in the American continents in 35 years. The team’s discovery is published in the Aug. 15 issue of the journal ZooKeys. 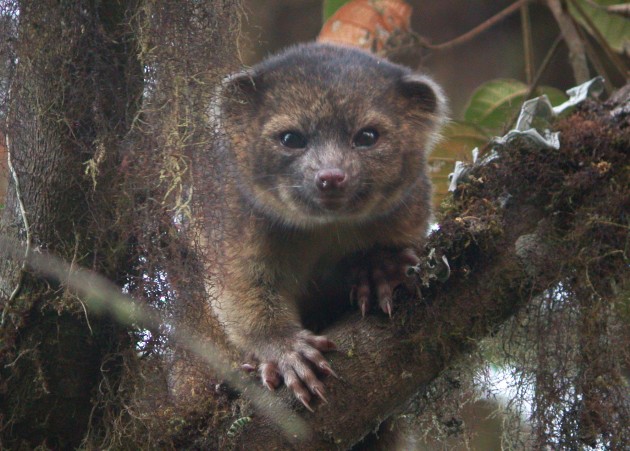 A team, led by Smithsonian scientist Kristofer Helgen, spent 10 years examining hundreds of museum specimens and tracking animals in the wild in the cloud forests of Ecuador. The result―the newest species of mammal known to science, the olinguito (Bassaricyon neblina) (Photo by Mark Gurney)

The olinguito (oh-lin-GHEE-toe) looks like a cross between a house cat and a teddy bear. It is actually the latest scientifically documented member of the family Procyonidae, which it shares with raccoons, coatis, kinkajous and olingos. The 2-pound olinguito, with its large eyes and woolly orange-brown fur, is native to the cloud forests of Colombia and Ecuador, as its scientific name, “neblina” (Spanish for “fog”), hints. In addition to being the latest described member of its family, another distinction the olinguito holds is that it is the newest species in the order Carnivora―an incredibly rare discovery in the 21st century.

“The discovery of the olinguito shows us that the world is not yet completely explored, its most basic secrets not yet revealed,” said Kristofer Helgen, curator of mammals at the Smithsonian’s National Museum of Natural History and leader of the team reporting the new discovery. “If new carnivores can still be found, what other surprises await us? So many of the world’s species are not yet known to science. Documenting them is the first step toward understanding the full richness and diversity of life on Earth.” 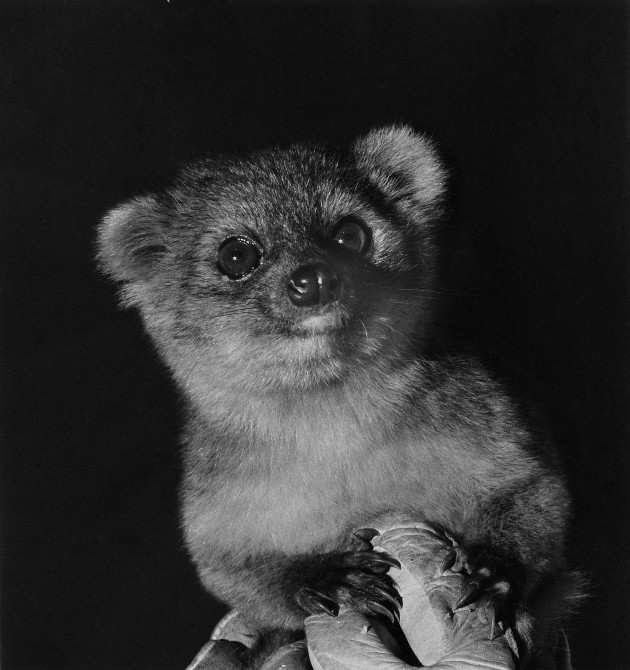 The olinguito (Bassaricyon neblina) came close to being discovered several times during the past century and was even exhibited in zoos. For example, this female olinguito lived in various zoos in the U.S. decades ago. The problem was a case of mistaken identity, which was solved with a decade of detective work by Smithsonian scientist Kristofer Helgen and his team, resulting in the description of a new species. (Photo by I. Poglayen-Neuwall)

Discovering a new species of carnivore, however, does not happen overnight. This one took a decade, and was not the project’s original goal―completing the first comprehensive study of olingos, several species of tree-living carnivores in the genus Bassaricyon, was. Helgen’s team wanted to understand how many olingo species should be recognized and how these species are distributed―issues that had long been unclear to scientists. Unexpectedly, the team’s close examination of more than 95 percent of the world’s olingo specimens in museums, along with DNA testing and the review of historic field data, revealed existence of the olinguito, a  previously undescribed species.

The first clue came to Helgen from the olinguito’s teeth and skull, which were smaller and differently shaped than those of olingos. Examining museum skins revealed that this new species was also smaller overall with a longer and denser coat; field records showed that it occurred in a unique area of the northern Andes Mountains at 5,000 to 9,000 feet above sea level―elevations much higher than the known species of olingo. This information, however, was coming from overlooked olinguito specimens collected in the early 20th century. The question Helgen and his team wanted to answer next was: Does the olinguito still exist in the wild?

To answer that question, Helgen called on Roland Kays, director of the Biodiversity and Earth Observation Lab at the North Carolina Museum of Natural Sciences, to help organize a field expedition. 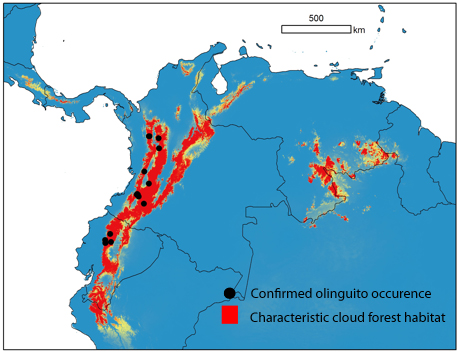 The olinguito is so far known only from cloud forest habitats in Colombia and Ecuador, but future investigations might show that it occurs in similar habitats in other South American countries.

“The data from the old specimens gave us an idea of where to look, but it still seemed like a shot in the dark,” Kays said. “But these Andean forests are so amazing that even if we didn’t find the animal we were looking for, I knew our team would discover something cool along the way.”

The team had a lucky break that started with a camcorder video. With confirmation of the olinguito’s existence via a few seconds of grainy video shot by their colleague Miguel Pinto, a zoologist in Ecuador, Helgen and Kays set off on a three-week expedition to find the animal themselves. Working with Pinto, they found olinguitos in a forest on the western slopes of the Andes, and spent their days documenting what they could about the animal―its characteristics and its forest home. Because the olinguito was new to science, it was imperative for the scientists to record every aspect of the animal. They learned that the olinguito is mostly active at night, is mainly a fruit eater, rarely comes out of the trees and has one baby at a time.

In addition to body features and behavior, the team made special note of the olinguito’s cloud forest Andean habitat, which is under heavy pressure of human development. The team estimated that 42 percent of historic olinguito habitat has already been converted to agriculture or urban areas. 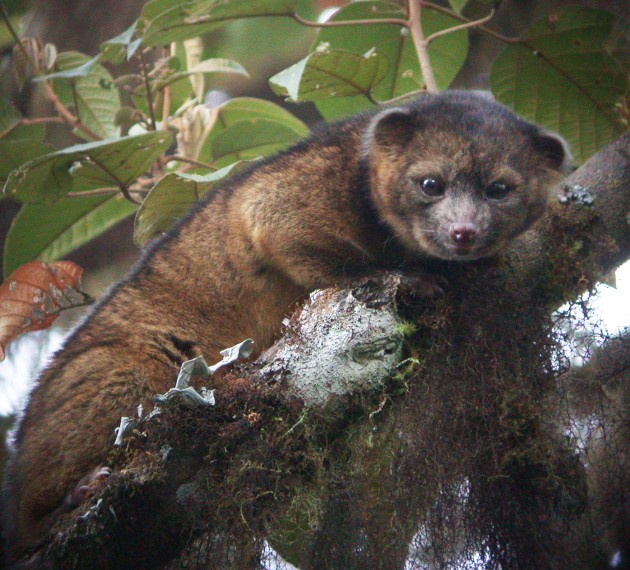 The olinguito mainly eats fruit, but may also eat some insects and nectar. (Photo by Mark Gurney)

“The cloud forests of the Andes are a world unto themselves, filled with many species found nowhere else, many of them threatened or endangered,” Helgen said. “We hope that the olinguito can serve as an ambassador species for the cloud forests of Ecuador and Colombia, to bring the world’s attention to these critical habitats.”

While the olinguito is new to science, it is not a stranger to people. People have been living in or near the olinguito’s cloud forest world for thousands of years. And while misidentified, specimens have been in museums for more than 100 years, and at least one olinguito from Colombia was exhibited in several zoos in the United States during the 1960s and 1970s. There were even several occasions during the past century when the olinguito came close to being discovered but was not. In 1920, a zoologist in New York thought an olinguito museum specimen was so unusual that it might be a new species, but he never followed through in publishing the discovery.

Giving the olinguito its scientific name is just the beginning. “This is the first step,” Helgen said. “Proving that a species exists and giving it a name is where everything starts. This is a beautiful animal, but we know so little about it. How many countries does it live in? What else can we learn about its behavior? What do we need to do to ensure its conservation?” Helgen is already planning his next mission into the clouds.

The olinguito is the smallest member of the raccoon family. It has thick, woolly fur that is denser and more colorful (orange or reddish brown) than its closest relatives, the olingos. Its head and body length is 14 inches long (355 mm), plus a tail 13-17 inches in length (335-425 mm), and it weighs 2 pounds (900 grams). Males and females are similar in size.

DIET:     The olinguito mainly eats fruit, but may also eat some insects and nectar.

BEHAVIOR:     These solitary animals live in trees and are mostly nocturnal. It is an adept jumper that can leap from tree to tree in the forest canopy. Mothers raise a single baby at a time.

HABITAT:     The olinguito is found only in cloud forests of the northern Andes Mountains