The North Pole isn’t the only place on Earth affected by slight increases in temperature. Until recently, scientific thinking used to posit that tropical forests, which already exist in warm climates, may not be impacted much by climate change. But a new study conducted by UC Santa Barbara’s National Center for Ecological Analysis and Synthesis shows that to be erroneous. In fact, the results indicate that tropical forests are producing more flowers in response to only slight increases in temperature. The findings were published online yesterday in the journal Nature Climate Change. 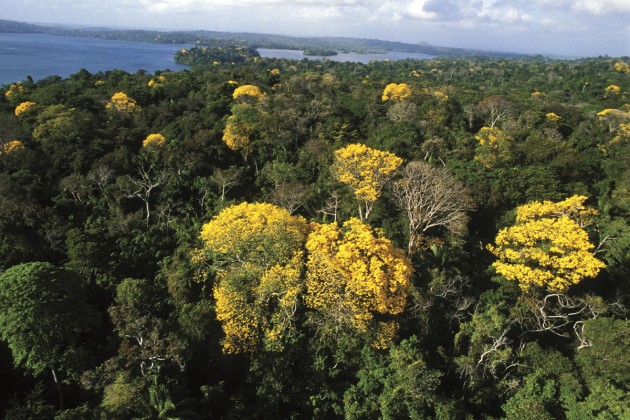 “Tropical forests are commonly thought of as the lungs of the Earth and how many flowers they produce is one vital sign of their health,” said Stephanie Pau, who conducted the research as part of a Forecasting Phenology working group while she was a postdoctoral associate at NCEAS. “However, there is a point at which forests can get too warm and flower production will decrease. We’re not seeing that yet at the sites we looked at, and whether that happens depends on how much the tropics will continue to warm.” 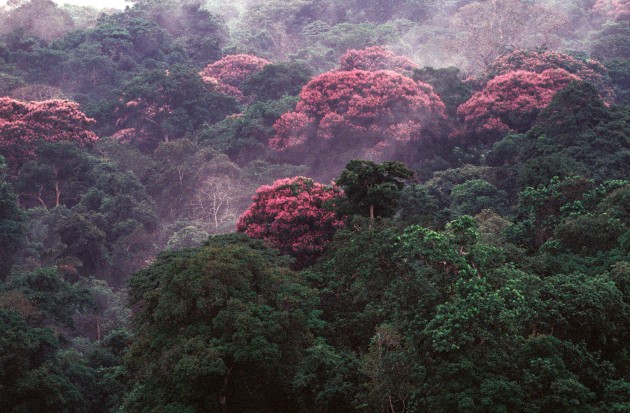 The purple blooms of Dipteryx panamensis can be seen in this image of the tree canopy of
Barro Colorado Island, Panama. (Photo by Marcos Guerra, Smithsonian Tropical Research Institute)

The study, which used a new globally gridded satellite dataset, examined how changes in temperature, clouds, and rainfall affect the number of flowers tropical forests produce. Analysis of the data indicated that clouds mainly have an effect on short-term seasonal growth, but longer-term changes in these forests appear to be due to temperature. While other studies have used long-term flower production data, this is the first study to combine these data with direct estimates of cloud cover based on satellite information.

The seasonally dry site has been producing more flowers at an average rate of 3 percent each year over the last several decades, an increase that appears to be tied to warming temperatures.

Flower productivity is a measure of the reproductive health and overall growth of the forests. The amount of sunlight reaching tropical forests due to varying amounts of cloud cover is an important factor, just not the most important when it comes to flower production. According to Pau, both sites still appear to respond positively to increases in light availability, yet temperature was the most consistent factor across multiple time scales.

“The tropics, which are already warm, probably won’t experience as much of a temperature increase as high-latitude regions.” Pau says. “Even so, we’re showing that these tropical forests are still really sensitive to small degrees of change.”—Source: University of California-Santa Barbara