A new study by two scientists from the University of California, Berkeley, and the Smithsonian Tropical Research Institute has unveiled how the tiny hummingbird adapts to flying in heavy rain. The impact of large, heavy raindrops poses a greater challenge to these tiny birds than it does to larger birds. Yet feed in the rain they must, as hummingbirds burn so much energy in flight that they cannot survive without feeding for more than a day or so. The study was recently published in the Proceedings of the Royal Society B.

Light to moderate rain had only a marginal effect on the bird’s flight, the researchers found, causing only a moderate reduction in the frequency of their wing beats.  Heavy rain however caused the birds to hover with a more horizontal body and tail position, increasing the surface area of their bodies exposed to the rain. With this change in flight posture they substantially increased their wing-beat frequency, requiring a much greater energy output of between 9 and 57 percent. 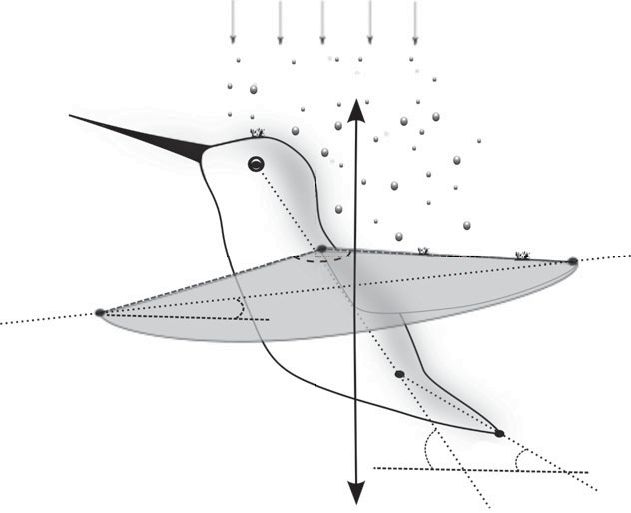 Image right: Lateral diagram of a hummingbird hovering in rain.

Although their plumage is highly water resistant and hummingbirds can perform rapid body shakes in flight, in a heavy rain the birds are fighting both raindrop impact and the weight of water adhering to their bodies.

“Light to moderate rain had only a marginal effect on flight kinematics,” the researchers write. “Remarkably, hummingbirds hovered well even under heavy precipitation with no apparent loss of control.”

Article link: “Flying in the rain: hovering performance of Anna’s hummingbirds under varied precipitation,” from the Proceedings of the Royal Society B.