Usually, running five minutes late is a bad thing since you might lose your
dinner reservation or miss out on tickets to the latest show. But when a
planet runs five minutes late, astronomers get excited because it suggests
that another world is nearby. 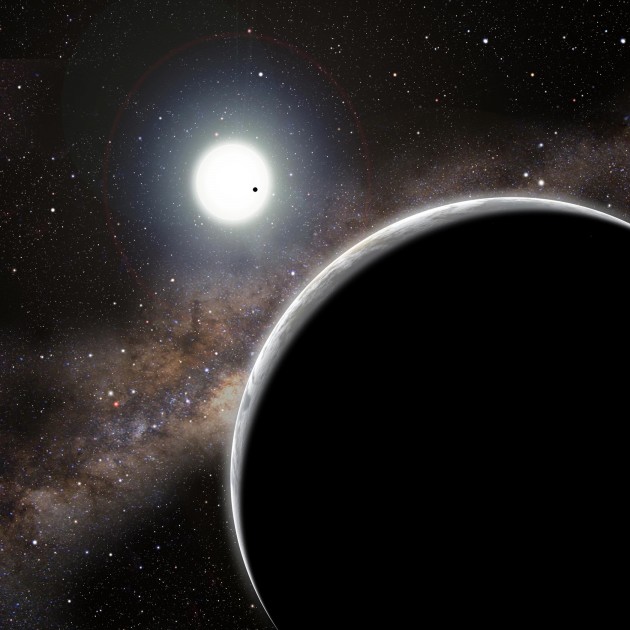 The “invisible” world Kepler-19c, seen in the foreground of this artist’s conception, was discovered solely through its gravitational influence on the companion world Kepler-19b – the dot crossing the star’s face. Kepler-19b is slightly more than twice the diameter of Earth, and is probably a “mini-Neptune.” Nothing is known about Kepler-19c, other than that it exists. (Credit: David A. Aguilar)

NASA’s Kepler spacecraft has spotted a planet that alternately runs late and
early in its orbit because a second, “invisible” world is tugging on it.
This is the first definite detection of a previously unknown planet using
this method. No other technique could have found the unseen companion.

can see,” said astronomer Sarah Ballard of the Harvard-Smithsonian Center
for Astrophysics (CfA). Ballard is lead author on the study, which has been
accepted for publication in The Astrophysical Journal.

“It’s like having someone play a prank on you by ringing your doorbell and
running away. You know someone was there, even if you don’t see them when
you get outside,” she added.

Both the seen and unseen worlds orbit the Sun-like star Kepler-19, which is
located 650 light-years from Earth in the constellation Lyra. The
12th-magnitude star is well placed for viewing by backyard telescopes on
September evenings.

Kepler locates planets by looking for a star that dims slightly as a planet
transits the star, passing across the star’s face from our point of view.
Transits give one crucial piece of information – the planet’s physical size.
The greater the dip in light, the larger the planet relative to its star.
However, the planet and star must line up exactly for us to see a transit.

The first planet, Kepler-19b, transits its star every 9 days and 7 hours. It
orbits the star at a distance of 8.4 million miles, where it is heated to a
temperature of about 900 degrees Fahrenheit. Kepler-19b has a diameter of
18,000 miles, making it slightly more than twice the size of Earth. It may
resemble a “mini-Neptune,” however its mass and composition remain unknown.

If Kepler-19b were alone, each transit would follow the next like clockwork.
Instead, the transits come up to five minutes early or five minutes late.
Such transit timing variations show that another world’s gravity is pulling
on Kepler-19b, alternately speeding it up or slowing it down.

The Kepler spacecraft will continue to monitor Kepler-19 throughout its
mission. Those additional data will help nail down the orbit of Kepler-19c.
Future ground-based instruments like HARPS-North will attempt to measure the
mass of Kepler-19c. Only then will we have a clue to the nature of this
invisible world.