A study conducted by Hamilton Farris of Louisiana State University Health Sciences Center in New Orleans, and Michael Ryan of the Smithsonian Tropical Research Institute and the University of Texas, has revealed new information about the way tungara frogs in the tropical rain forest hear, sort, and process sounds which is very similar to the way humans do. The knowledge could be applicable to communication disorders associated with hearing loss and attention deficits or difficulties. The study was published online in Nature Communications on August 2, 2011. 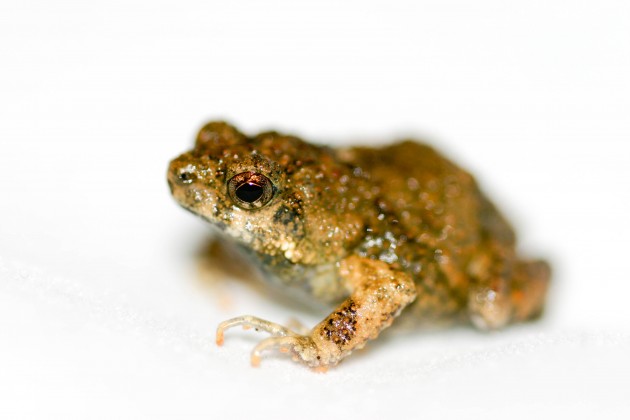 “An important component of successful communication is being able to tell which sender among many is sending the signal,” explains Farris. “In auditory neuroscience it’s called the ‘cocktail party problem.’ A good example of a mistake in source assignment is when a ventriloquist performs.”

To understand how the brain solves the cocktail party problem – assigning sounds to their correct source in a noisy or multi-source environment – the researchers chose to study the tungara frog because, unlike other subject species, it easily performs this complex behavior. The way it communicates is also a research asset. Male tungara frogs produce complex calls (not just repeated notes) consisting of two components that are speech-like: the vowel-like “whine” and the consonant-like “chuck.”

For female tungara frogs, assigning the distinct components of male calls to the correct source is particularly challenging because males sing in aggregations, producing overlapping calls that lead to perceptual errors just like at a cocktail party. But, it’s particularly important to the mate-searching female that she can accurately distinguish the male whose call she prefers from all of the others.

Using the labs at the Smithsonian Tropical Research Institute in Panama, Farris and Ryan investigated two types of cues/parameters of the call – spatial separation and call syntax – as potential cues for proper source assignment. Interestingly, they found that the frogs, like humans, use relative comparisons to form auditory groups that are assigned to the same source. This means that they take the available sounds and then group those that are most similar. And they are more likely to group the two components with the smallest relative differences in call parameters. This is a flexible strategy that humans use in some conditions as well.

“Thus, in noisy, complicated environments, the cognitive solution is not based on absolute stimulus rules, but one which compares all the sounds and then deduces their sources,” Farris says. “Based on our research, we now have a better understanding of how the acoustic cues are used to solve the problem, an understanding that will guide research advances to solve communication problems associated with hearing deficits and disorders of attention.”

The study was supported by grants from the National Institutes of Health and the National Science Foundation, as well as the Smithsonian Tropical Research Institute in Balboa, Panama.

Females can place limits on evolution of attractive features in males, research shows