White dwarfs are dead stars that pack a Sun’s-worth of matter into an Earth-sized ball. Astronomers have just discovered an amazing pair of white dwarfs whirling around each other once every 39 minutes. This is the shortest-period pair of white dwarfs now known. Moreover, in a few million years they will collide and merge to create a single star. 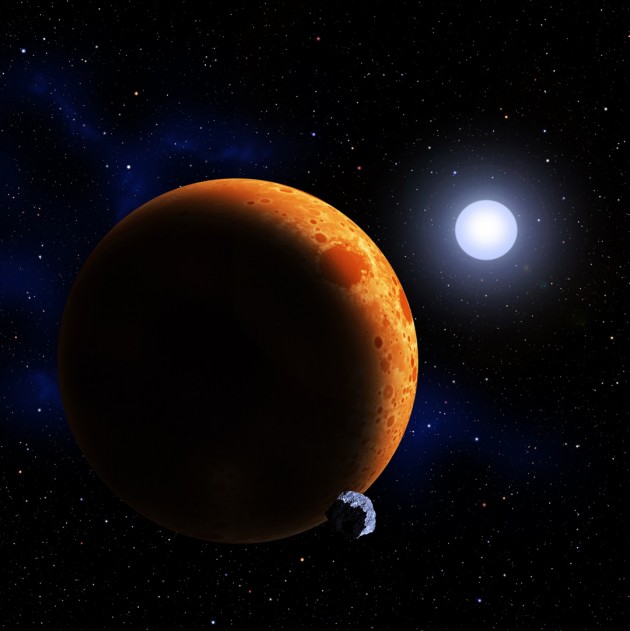 Astronomers have found a pair of white dwarf stars orbiting each other once every 39 minutes. In a few million years, they will merge and reignite as a helium-burning star. In this artist’s conception, the reborn star is shown with a hypothetical world. (Image by David A. Aguilar)

“These stars have already lived a full life. When they merge, they’ll essentially be ‘reborn’ and enjoy a second life,” says astronomer Mukremin Kilic of the Harvard-Smithsonian Center for Astrophysics and lead author on a paper announcing the discovery.

Out of the 100 billion stars in the Milky Way, only a handful of merging white dwarf systems are known to exist. Most were found by Kilic and his colleagues. The latest discovery will be the first of the group to merge and be reborn.

The newly identified binary star (designated SDSS J010657.39 – 100003.3) is located about 7,800 light-years away in the constellation Cetus. It consists of two white dwarfs, a visible star and an unseen companion whose presence is betrayed by the visible star’s motion around it. The visible white dwarf weighs about 17 percent as much as the Sun, while the second white dwarf weighs 43 per cent as much. Astronomers believe that both are made of helium.

The two white dwarfs orbit each other at a distance of 140,000 miles – less than the distance from the Earth to the Moon. They whirl around at speeds of 270 miles per second (1 million miles per hour), completing one orbit in only 39 minutes.

The fate of these stars is already sealed. Because they wheel around so close to each other, the white dwarfs stir the space-time continuum, creating expanding ripples known as gravitational waves. Those waves carry away orbital energy, causing the stars to spiral closer and closer together. In about 37 million years, they will collide and merge.

When some white dwarfs collide, they explode as a supernova. However, to explode the two combined have to weigh 40 percent more than our Sun. This white dwarf pair isn’t heavy enough to go supernova. Instead, they will experience a second life. The merged remnant will begin fusing helium and shine like a normal star once more.

This binary white dwarf was discovered as part of a survey program being conducted with the MMT Observatory on Mount Hopkins, Ariz. The survey has uncovered a dozen previously unknown white dwarf pairs. Half of those are merging and might explode as supernovae in the astronomically near future.