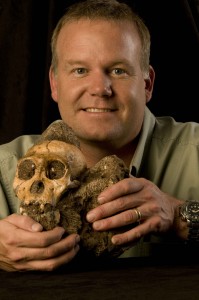 Lee Berger with the cranium of the juvenile skeleton of Australopithecus sediba.

On Thursday, Feb. 10, Paleoanthropologist Lee Berger of the Institute for Human Evolution at the University of the Witwatersrand, Johannesburg, donated casts of Australopithecus sediba to the Smithsonian’s National Museum of Natural History. The casts of these skeletons—which include two complete copies for public display and two copies for the Human Origins Program’s research collection—were donated as part of a research collaboration between the United States and South Africa. A separate box of unpublished fossil specimens was also presented to the Smithsonian and will be published later this year. 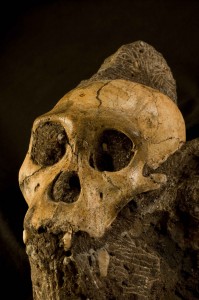 Close up of the cranium of the juvenile Australopithecus sediba. (Photos by Brett Eloff)

A. sediba was discovered in 2008 in the Malapa Cave at the Cradle of Humankind World Heritage Site located outside Johannesburg. The specimens consist of an adolescent male, dubbed Karabo, and a mature female found relatively close to one another, and dated between 1.95 and 1.78 million years ago. It was announced as a new species of early human ancestor on April 8, 2010. These first specimens represent the two most complete skeletons of early hominins ever discovered, and have been referred to as one of the most important discoveries in the search for human origins in Africa.