Medieval book is important resource for how plants were once collected, treated and used

Among its treasures, the Bibliothèque de France in Paris holds a great many splendidly illustrated books on medieval herbs and medicines. One of these manuscripts is latinus 9333, which recently was reproduced in facsimile with a volume of study. Alain Touwaide, Historian of Sciences in the Department of Botany at the Smithsonain’s National Museum of Natural History, contributed three chapters in the study volume highlighting the history, importance and originality of the manuscript. 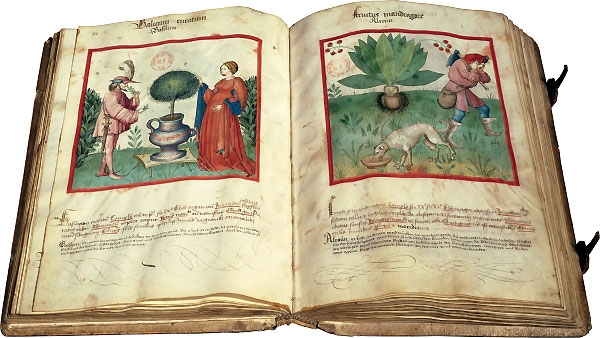 Latinus 9333 is the Latin translation of the so-called Tacuinum sanitatis, a medieval handbook on wellness written in Arabic by the 11th-century physician ibn Butlan. It  deals with factors influencing human health: from the air, the environment and food, to physical exercise and sexual activity.

In contrast to the Arabic original, several copies of the Latin version are illustrated. Characteristically, these illustrated Tacuinum sanitatis come from northern Italy and date to the 14th century. Their illustrations include scientific representations of plants and other substances used as medicines, as well as illustrations featuring other factors that influence human health. The illustraions offer snapshots of medieval daily life, environment and activities.

Such images are of particular importance to the history of botanical knowledge and illustration, Touwaide points out in the study volume. Plants are represented here in great detail, inserted into their environment, be it natural or human. Many of the images include human figures and illustrate the way plants were collected, treated, used, or were embued with cultural meanings. They constitute material of great interest for the study of the interaction between men and plants.

The manuscript encapsulates a knowledge and wisdom gained by trial and error over centuries, often going back to a much earlier period. The archeology of its text brings to light the odyssey of medicine and science in the Mediterranean and beyond, as latinus 9333 moved from Italy further north, where its Latin text was translated into German.