Ancient star discovered through patience and clever use of technology 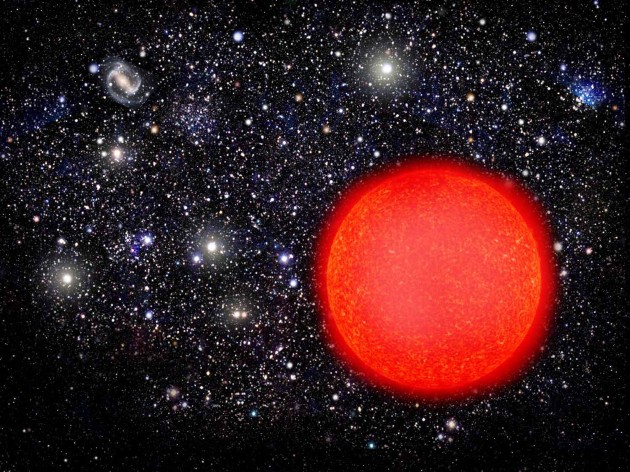 Astronomers at the Smithsonian Astrophysical Observatory have discovered a relic from the early universe–a star that may have been among the second generation of stars to form after the Big Bang. The ancient star, named S1020549, is located in a mini-galaxy within the constellation Sculptor.

“This star likely is almost as old as the Universe itself,” says Smithsonian astronomer Anna Frebel.

Scientists think that our Milky Way galaxy grew to its current size by swallowing many such mini-galaxies over billions of years. (In general, most galaxies are believed to form this way.) The newfound star supports this theory because its chemical make-up is very similar to the Milky Way’s oldest stars.

Finding this stellar relic wasn’t easy. It is 60,000 times dimmer than the faintest star visible to the unaided eye. The team also had to distinguish it from many surrounding stars that aren’t so old. Just like an archaeological dig, the hunt succeeded through a combination of patience and clever use of technology.

“This was harder than finding a needle in a haystack. We needed to find a needle in a stack of needles,” says astronomer Evan Kirby of the California Institute of Technology, developer of the search technique. “We sorted through hundreds of candidates to find our target.”

Video: In this computer simulation, dwarf galaxies swarm like bees around a beehive, crashing together to form a large spiral galaxy similar to our Milky Way.
(Video credit: Fabio Governato/University of Washington)

Once located, the star was studied in detail. Astronomers determined that it contained 6,000 times less “metals” than our Sun. (To astronomers, “metals” are chemical elements heavier than hydrogen or helium.) Because metals are produced by stars and grow in abundance over time, they were rare in the early Universe, so old stars tend to be metal-poor.The oldest and most metal-poor stars in the Milky Way reside in a spherical halo that surrounds the galactic center, extending for thousands of light-years in all directions. (A light-year is 6 trillion miles.) Finding a similar star in a nearby miniature, or dwarf, galaxy supports the idea that large galaxies attain their size by absorbing their smaller neighbors.

“If you watched a time-lapse movie of our galaxy, you would see a swarm of dwarf galaxies buzzing around it like bees around a beehive,” Frebel explains. “Over time, those galaxies smashed together and mingled their stars to make one large galaxy–the Milky Way.”

The researchers expect that further searches will discover additional metal-poor stars in dwarf galaxies, although the distance and faintness of the stars pose a challenge for current telescopes. The next generation of extremely large optical telescopes, such as the proposed 24.5-meter Giant Magellan Telescope, will open up a new window for studying the growth of galaxies through the chemistries of their stars. –Christine Pulliam