Accustomed to peering through the dust and debris of outer space, astronomers at the Smithsonian’s Whipple Observatory in southern Arizona were perplexed to find fresh deposits of dust and dirt upon the fragile mirrors of their telescopes. What type of creature is small, four-legged, and likes to leave its footprints on scientific instruments, they wondered? 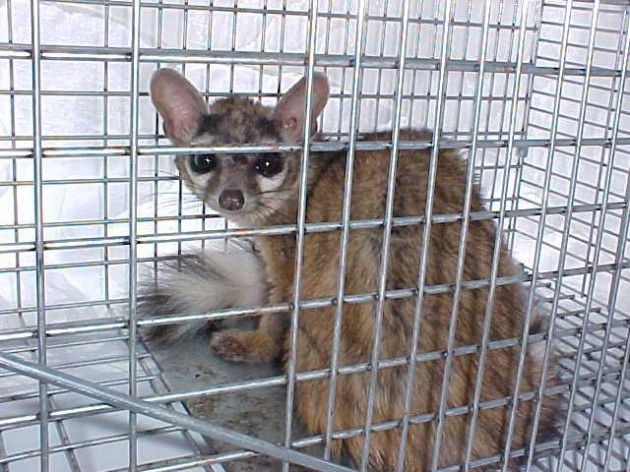 Photo: This ringtail cat was caught by Whipple Observatory Astronomers and safely released elsewhere on the mountain, away from the observatory’s instruments.

The mystery visitor first appeared in 2008, wandering into a building that holds the MEarth project—eight robotic telescopes designed to search for distant planets. Over the months that followed, the stealthy critter returned, eventually marring the mirrors on five of the modest-sized telescopes. Even Neil deGrasse Tyson, host of the PBS television show NOVA ScienceNOW, commented on the telltale prints when he visited the observatory for an episode that aired during the summer.

With a little ingenuity and a live trap, the mystery was finally solved. The nighttime visitor proved to be a ringtail cat. A member of the raccoon family, the ringtail cat is native to arid regions of North America, particularly the American Southwest. The cute creature, which is the state mammal of Arizona, probably entered the building to search for tasty insects.

The captured ringtail was released unharmed at a spring some distance away from the mountaintop observatory. Not long after, a second ringtail also was trapped and released elsewhere. Yet another ringtail was captured on film snatching a snack at the Whipple Observatory base camp, located at the foot of the mountain.

Since the telescope building that the ringtail cats frequented is open every clear night for observations, the possibility remains that another ringtail may wander in at any time. Anyone can watch for the nocturnal interlopers via the MEarth Webcam.

“We’re considering making the ringtail cat the unofficial mascot of the MEarth project,” said project leader David Charbonneau. “With those big eyes, they’ve certainly got the night vision to be natural-born astronomers!”